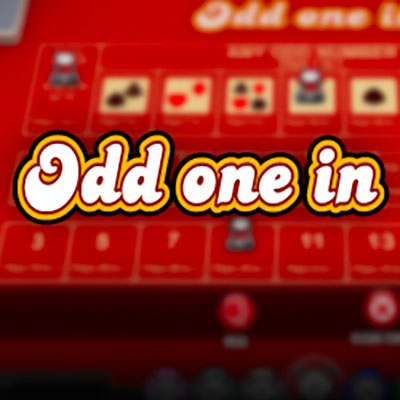 This is so much more than a simple card game! In fact, Odd One In is a fascinating hybrid of cards and roulette. For those who haven’t played this may sound like an interesting concept, but once you get you to grips with the rules it’s fairly straightforward. The game comes with some unique characteristics, for instance, Odd One In features a half roulette wheel.

Do you want a basic understanding of how the game works? Well, listen up. Featuring a standard deck of cards, players will be expected to place bets on the outcome of a two-card deal, and if you haven’t figured it out already, it’ll need to be an odd number. Similar to roulette, your bets will also be placed at random – are you following yet? If not, don’t worry, it won’t be long before you’re an expert!

Producing games since 2002, 1x2 Gaming has over 30 slots, which can be found across a range of online casinos. Yet they don’t just boast slots, they also offer a good selection of fantastic casino games. Based in the UK, they retain a global presence, which mainly comes down to their unique gaming concepts. Not only do they appeal to the mainstream market, but they’re also popular among more niche audiences.

As innovative thinkers, they also place a big emphasis on their mobile players with more and more of their games being made available via smartphone and tablets. Meanwhile, they’re a trustworthy company too, given that their games are both legal and regulated.

As you begin to play Odd One In you’ll see a table full of betting options. The first thing you’ll need to do is set your bet level, this can be anything from 10 to 200 coins. After this, you’ll be expected to set your betting options based on the rows. Once everything is ready to go, it’s time to start. Players will be dealt two cards, if the two-card total matches any of your bets you’ll be generously rewarded. You can then choose a new bet or reset it, but this will be based on your choice.

The main goal is to guess which two cards will be drawn, and as previously mentioned, they’ll only be odd numbers. Each row has a different set up – the top row displays a mix of small numbers, large numbers, odd numbers and numbers with suits, while the middle row is doubles and includes numbers like three and five or five and seven. The bottom row is where you’ll find the highest pay out, so it’s a little more risky. This row features single numbers, with number 3 offering the game’s top prize.

Once you are familiar with the rules, Odd One In is fairly straightforward in terms of game-play. If you’ve exhausted all the most popular casino games, this unique idea is a fantastic alternative to roulette. Plus, there’s also a possible 75/1 pay out when you land a 3 – surely that alone is enough to awaken your inner gambler.