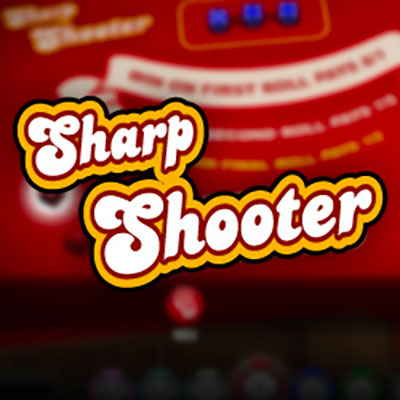 Do you love the roll of the dice, the suspense as they hit the table and tumble again and again waiting to reveal your fate? If the answer is yes then Sharp Shooter is the game for you. This online casino game will transport you right into the casino, and you will feel fully immersed, as though you are sitting at the table in Vegas. This unique game has a cool intro that takes you straight on to the casino floor, and passes through until you reach the bet table. Whilst the game play is simplistic, it is surprisingly entertaining and will have you playing for hours.

1x2 Gaming was founded in 2002 and is the founding brand of the 1X2 Network which is a UK supplier of casino and gambling games to international gaming sites. Since its inception the company has grown and expanded, providing unique and innovative gaming for a variety of gamers. The company has gone from strength to strength and has worked alongside some of the big names in the industry providing top quality online gaming solutions and improving year after year.

There are many popular dice games to be played in the live and online casinos, but none as popular as craps. Craps is thought to date back to the Crusades and then was later influenced by the French. The modern American version of the dice game was brought to New Orleans by a wealthy politician and descendant of Louisiana landowners. But the flaw in this game became apparent when players began using fixed dice so John H. Winn (an American dice maker) introduced the ‘don’t pass’ option in order to fix this problem and that version still exists today. In the online dice games on today, this problem is obviously avoided altogether.

If you fancy your chances in this game of dice, the rules are quite simple:

This online casino dice game by 1X2 Gaming is a surprisingly engaging game. If you love a game stripped back to basics and want to experience the feel of actual casino gameplay, you will fall for this game immediately and it will keep you coming back time and time again. The rules are simplistic and a wide range of players or different budget and experience will have fun playing.