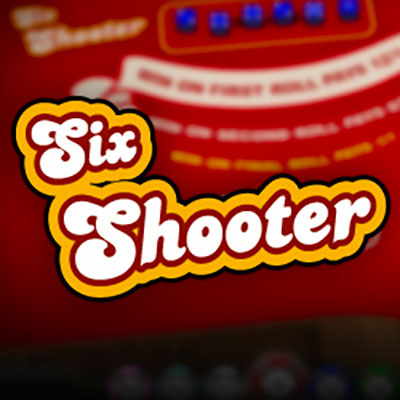 Six Shooter is an exciting online casino game from Nextgen Gaming, which is hard to compare to any other game you've played before. It is a game that is designed purely for virtual or online play, and it is not a kind you'll find in a brick and mortar casino. This is not an online slot, but a dice-based game that is simple in design and gameplay. To try your hands on this game, you can play on 666 casinos right away.

NextGen Gaming is apparently one of the best-known online casino games providers in the world of online casinos.  The developer is the brains behind a range of table games and online slots for both smartphones, desktops, computers, and tablets. NextGen regularly updates their offers with new hi-tech slots that provide creative graphics, gameplay, and original themes so that players can stay entertained as they earn cash prizes. This software provider has been around since the later years of the '90s, so their offerings are always a reflection of their expertise. Other of the popular online slot games by NextGen includes:

You can enjoy these NextGen online casino games on 666 casino

Six Shooter is a clean and good-looking online casino game, and all the action happens on one screen. The gameplay in this casino game happens on something that looks like a crap table, and it pits the punter against the croupier in a game of dice. The sole aim of Six Shooter is to successfully match the six dice that the croupier throws with nine of the punter's own. Also, the faster the goal is accomplished, the higher the return.

Once you are unable to match all the numbers with the use of nine dice, then the croupier wins. After that, you count your wins or losses. Make use of the game's 'New Bet,' 'Re-bet' or 'Rebet x 2' options to get things underway.

Six Shooter is a high-quality dice game that punters will love, and it's way simpler than anything out there like it. Fortunately, you can play right away on 666 casino.