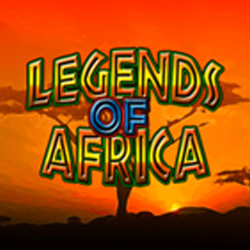 Don't be fooled into thinking that Legends of Africa is just another Safari themed slot game, where you see phoney gazelles galloping through the fields of the Savannah, and make mediocre winnings that will leave you less than thrilled.

You won't see an ordinary reel grid, you won't see normal paylines, and you definitely won't see phoney gazelles galloping through the fields of the Savannah. But what you will see are the magnificent beasts of Africa helping you gain the prizes that you will be aiming to win!

When you want to play casino games by a developer that only think about how to make the player's experience reach its peak every time, everyone would point their fingers at 2 By 2 Gaming.

They are known to aid companies enter into the digital gaming market by providing online conversions and consultation services to them. And they make sure that their games don't just appeal to one group of players, but to all kinds of casino gamers, both advanced and novice.

The games that they've developed and released in the past has gained a high amount of reviews, games like Humpty Dumpty Wild Riches, Enchanting Spells, and Ming Dynasty. Therefore, you can be sure that you'll have an amazing time playing Legends of Africa!

You'll really feel like you're travelling through the Safari and see the great giants of the animal kingdom right in front of your eyes. Speaking of giants the reels, they're are set on a 2x3x5x3x2 grid which differs from the ordinary 5x3 grids that you'd have seen on traditional video slot games.

All the free spins with modifiers play out with the mystery positions where symbols can be transformed to create better winning combinations.

This game has all of the key components that a player would expect in a slot game, but all of the other special factors that it entails are what a player needs to make them return to that game time and time again. With it's large RTP rate of over 95%, you will be asking yourself why you haven't gone across the Safari on your device, and make big winnings on the Legends of Africa yet!