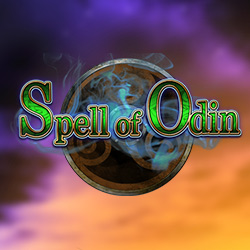 Those who remember classics at school will know Odin as the Norse God associated with many things including healing, wisdom, death and sorcery.  Now, thanks to 2BY2 gaming, the captivating figure has been brought to life in Spell of Odin, a five-reel, 25 pay-line slot game.  As with the man himself, the features in Spell of Odin are a force to be reckoned with.  The Free Spin feature gives players the power to choose from three options of spins and multipliers while Stacked Odin Wild’s can result in some truly divine wins.  Players who make it all the way to the fort fortress of Aesir can potentially scoop a jackpot of 800x their original stake.

2BY2 Gaming are a Chicago-based gaming developer with a penchant for creating highly innovative games using proprietary mechanics and technology.  Proving that they are a company who like to lead rather than follow, 2BY2 Gaming have secured more than 65 patents which have been developed by a team with more than 120 years’ experience.  Although 2BY2 Gaming’s portfolio includes many fairytale-themed slots such as Humpty Dumpty and Pinocchio’s Fortune, it also caters for alternative tastes with games such as Gunsmoke, Crystal Gems, Cosmic Invaders and Ming Dynasty.

Make yourself at home in Asgard, one of the nine worlds where Odin and his Godly friends reside.  While the visuals aren’t on par with some of the detailed animation we have seen in newer video slots, the theme is well-executed and complimented by the foreboding sound effects.  Lower value symbols are the playing cards 10, J, Q, K and A while premium symbols include a ring, a Viking longboard, a horse and blonde and brunette maidens who both span two rows of a reel.

The scatter symbols is a Viking sword and shield with the word ‘Bonus’ emblazoned upon it.  Show reverence for the Odin wild symbol as this substitutes for all symbols bar the scatter.

Spin three or more Free Spin scatters to unlock a choice of three Free Spin features.  These include:

Stacked Odin Wilds will appear on reel three and duplicate themselves to another reel.  Possessing godlike powers, these wilds substitute for all symbols except for the scatters.

Fans of Norse mythology will be transfixed by the power of Spell of Odin, a Nordic-themed slot from 2BY2 Gaming.  Although the setting isn’t particularly striking aesthetically, the strength of this game lies in its substance.  A choice of Free Spin bonuses is a nice touch, as is the replicating Stacked Odin Wilds which can trigger multiple wins across the reels.  Players who survive long enough to reach the fortress of Aesir will be greatly rewarded with a jackpot of up to 800x their original stake.