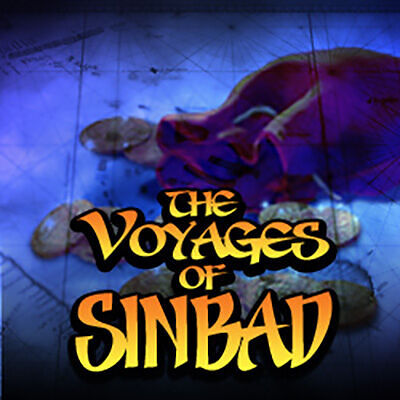 A Hero of the seas!

Voyages of Sinbad provides you with an enchanting journey away from your typical online slot game. This game sails you through the seas of South East Asia and Africa coming face to face with ancient mythological creatures. Throughout his travels Sinbad the sailor encounters a man with the head of a bull who goes by the name of Minotaur and Cyclops, a one eyed monster. The slot captures the quest of Sinbad featuring a mix of symbols including a Ship, a temple and a mysterious lady, all of which push you towards cash wins!

A well-established slots developer within the casino industry, Leander Games are widely known for their innovative themes and high quality graphics, a promising asset from a developer that has only been around since 2008. Along with delightful graphics, almost of their slots have bonus gameplay. Leander take ideas further than before, with their mix of traditional gambling games where roulette tables, turn to card slots and then end on bingo tables. It’s undoubtedly appealing to every slot player out there.

Some other adventurous titles from Leander include:

Set on the backdrop of a treasure map, the game is made up of five game reels with a chose of between one and twenty of the possible lines you want to play. A variety of magical symbols includinga temple, treasure, a golden compass and a sea horsecould quite possibly lead you to a win with some paying out for two symbols in a row while others pay out for three. The biggest winner comes from the ‘Voyagers of Sinbad’ symbols if you manage to grab five in a row!

The Autoplay button allows you to set a certain amount of spins or you can stop the game when you hit a bonus round, and they’re plenty of those! The reels remind you of gold tinted treasure, somewhat comparable to coins. As the reels spin by, the rich enchanting jingle passes you through Sinbad’s mystical journey fighting beasts and sailing the great oceans.

Leander have dropped a diamond with this one! If you are ready to sail with Sinbad on a whirlwind voyage through mystery and magic, there is always going to be a treasure chest of delight waiting at the end with this one.