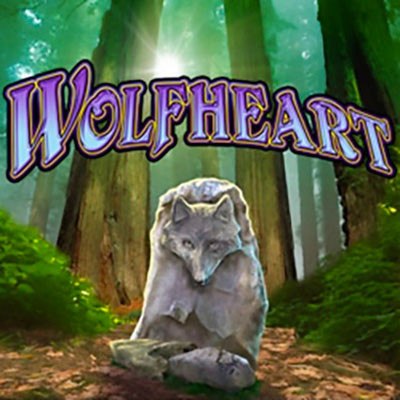 Wolfheart is another howlingly good slot game from the creative brains at 2BY2 Gaming.  This werewolf themed uses an unusual game-board format of eight reels spread across six rows.  Fans of 2BY2 Gaming’s other titles will recognise the configuration from Giant Riches, but more on that later…

To make a mark in the online gaming industry requires creativity, technical expertise and the ability to look at things a little differently:  enter 2BY2 Gaming.  Based in Chicago, 2BY2 Gaming has a staff with more than 120 years of experience between them. This is clearly put to good use as the games developer have been issued more than 65 patents (with an additional 35 patents pending) for their innovations in areas such as game mechanics.  Players who aren’t familiar with 2BY2 Gaming’s portfolio should definitely check out Giant Riches, Cosmic Invaders and Crystal Gems.

The game-board is a rich, regal affair, with the main character in human form on the left-hand-side.  Although it is not as confusing as it first appears, the unusual format does need some explaining.  The first two reels are stretched down all six rows while the rest of the reels are slit into two three x three mini game-boards.

Care has been taken in the choice of premium symbols which are in-keeping with the lycanthrope theme.  These include a golden sword, a wolf pendant and a red flag, while lower-prize symbols are represented by bejewelled playing card suits.

Noble Lord Wolfheart is wild and substitutes for all other symbols except for the gold scatters.  Watch out for the Lord’s better half as she also has a feral secret…

Start the Free Spin Bonus round by spinning three or more gold scatters.  The more scatters there are in view, the more spins you will receive up to a king’s ransom of 60 free spins.

During the Free Spin Bonus the full moon comes out transforming Lord Wolfheart and his mysterious maiden into their wolfish alter-egos.  These black and white wolf stacked symbols are also wild with payouts of up to 50x your stake for five-of-a-kind wins.

Stacked reels can morph into another symbol like the wolf Lord and Lady themselves.  If these symbols turn golden then the win will be doubled for good measure.

Howl at the moon with this wild online slot from 2BY2 Gaming.  Although we have seen the eight-reel format in other 2BY2 Gaming titles, players who are new to it might need a few spins to adapt.  I would have to say that it is worth the effort though a 2BY2 Gaming have done a great job in pulling off the medieval werewolf theme by balancing the courtly regalia with the sense that something is about to change… Wolfheart boasts an RTP of 96.03% so you don’t need to be a werewolf fanatic to enjoy this one.