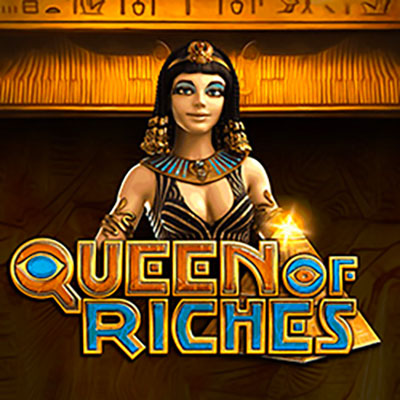 Try your hand at taming the Queen of Riches in this slot from Big Time Gaming (BTG). This game takes on a well-worn theme of Ancient Egyptian online casino games and has created a unique experience that players can enjoy. More experienced players should know, however that ‘The Queen of Riches’ is no pushover, with 6 reels and the potential to reveal 7 symbols as part of BTG’s ‘Megaways’ feature.  There are over 100,000 different ways to win the game, so anyone has a chance to walk away with untold riches.

While the game does present a more difficult proposition to players, its presentation of the Ancient Egyptian theme is fairly similar to other designs seen on the market. The symbols include Egyptian religious symbols portraying religious icons such as the Eye of Horus, the sun god Ra, pyramids and blue scarab beetles.

ustralian developer that offers ten online slots games to casinos around the world, in addition to Blackjack and Roulette. BGT has built an enviable reputation for excellence thanks to the combined efforts of Nik Robinson CEO, Huw McIntosh CTO, and Creative Director Ian Schmidt.

While the Ancient Egyptian theme is well known, BGT have revitalized the gameplay for this slot. Firstly, whenever two or more identical symbols appear on the reels from left to right the player gets a win and while this isn’t revolutionary in itself, this online slot boosts these numbers due to the 6 reels packed full of symbols. None of the reels have set number of positions, meaning that 3 to 7 icons could appear for every spin.

This is called the Megaway feature and results in every spin offering a different number of potential wins. With the maximum number of winning possibilities being a whopping 117,649, you’ll become the Queen or King of riches in no time!

If you feel that that wining number could do with a couple thousand more possibilities, this slot will give players another boost with wild symbols. These icons present the Queen of Riches in all her resplendent glory and will cover all 7 reel positions, substituting for all icons to complete the winning combination.

These symbols come with random multipliers from 1x to 7x, which are then applied to all wild wins created. These wild-laden reels can even multiply each other resulting in incredibly high multiplier numbers. Thought Egypt was boring? Think again!

With the added feature of a random Reel Clone that can replicate up to 6 identical reels on any spin in the main game – players can walk away with some gigantic wins if they play their cards or more importantly, reels right.

Ancient Egypt has awoken from the dead with this unique and challenging game from BGT. With 6 reels, numerous methods of winning and gargantuan prizes on the horizon for successful players, the Queen of Riches stands out from the rest as an exciting prospect for players.