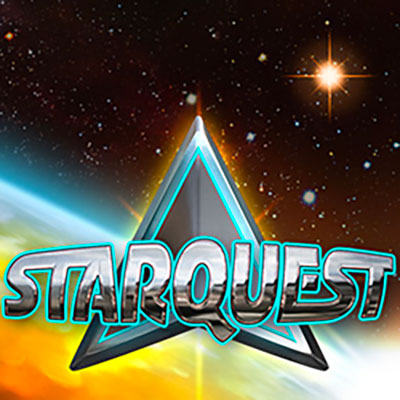 Starquest follows the space travels of an intrepid female astronaut as she discovers new worlds and big cash prizes.  This innovative slot from Big Time Gaming can spin up to seven symbols across each of its six reels.  Spinning stacked wild multipliers increase the potential ways to win up to an out-of-this-world total of 117649.  Although the jackpot is only 15x your stake, Starquest is wall to wall action with great looks, stellar features and a Respin Wilds feature with stacked reels and multipliers of up to 5x.

Big Time Gaming are an online games provider who were founded in Australia and have been growing steadily over the last 10 years.  During this time, Big Time Gaming have been true to their name by creating an impressive portfolio of games in more than twenty languages played across the world including Queen of Riches, Temple Quest slot, Lucky Streak slot Tumbling Treasures and White Rabbit.  Using innovation is at the forefront of Big Time Gaming’s strategy with the company now looking at ways to incorporate VR into its offering.

The roster of symbols in Starquest is short but sweet with traditional playing card numbers from 9 to A for the lower-value symbols.  Premium symbols are represented by green, blue and red gems as well as an intergalactic badge like Starquest symbol.  Wilds are represented by the heroine of slot’s space expedition theme who appears stacked across the whole reel.

The transparent game-board is set against a deep space-scape with shooting stars and the dust off nearby planets thrown in for good measure.  Big Time Gaming have also put time into the audio which is a kind of ambient trance tune.

Spin a Full Reel Wild and the stack stays on the reels for a free respin.  The wild starts with a 1x multiplier which increases with every spin up to 5x.  Spinning further Full Reel Wilds will lock the wilds in place and increase the multiplier across all of the stacked wilds.

For those who have dreamed of journeying into space but haven’t quite got the funds, Starquest from Big Time Gaming promises other worlds of multipliers and big cash prizes.  The theme is highly-polished with crisp graphics and a spacey trance soundtrack that fits the action perfectly.  Equal time has been spent on the Respin Wilds Feature which can result in white dwarf-sized wins.  Although the jackpot on offer isn’t the largest we’ve seen, wins come thick and fast across the six-reel rows - when you consider that there is an astronomical 117649 ways to win, it isn’t hard to see why.  Fans of this game should check out other titles from Big Time Gaming such as Temple Quest and White Rabbit which showcase this studio’s considerable creative talents.