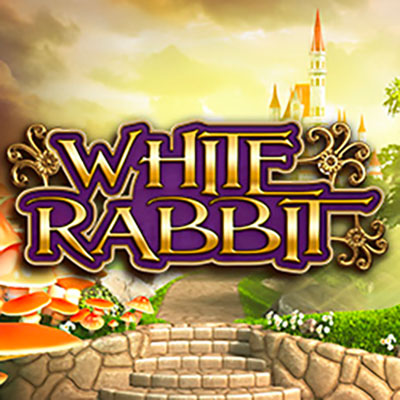 Follow Alice deep down into the rabbit hole, meet the white rabbit himself and be careful of the trickery of the Cheshire cat as you make your way through Wonderland. Beware the Queen of Hearts as you make travel through the giant mushrooms, meet the talking caterpillar and explore the wood and all its magical wonders. The beautiful graphics and alluring audio in this game really set the scene as you spin, and you will see all your favourite Alice in Wonderland characters along the way.

Big Time Gaming online slot games are instantly recognisable with the high-quality audio and graphics and often cartoonish, fun and brightly coloured styles. They produce some of the highest quality slot games with years of experience behind them. They have shown themselves to be big industry players time and time again with an impressive repertoire of top notch slot games. White Rabbit is visually crisp and the graphics greatly enhance the gaming experience.

Alice in Wonderland was written by Charles Lutwidge Dodgson under the pseudonym Lewis Carroll. Alice, was in fact named after a real little girl called Alice Liddell, who was the 10-year-old daughter of the Vice Chancellor of Oxford University. Alice and her sisters where on a boat trip down the Thames, when Lewis Carroll told them the tale and they begged him to write it down for them. The original copy for Alice is on display at the British Library. The highly influential book has been the focus of music, films and theatre for many years and since it was first published, Alice’s Adventures in Wonderland has never been out of print and has been translated into nearly 200 languages.

Immerse yourself into Alice’s wonderland and learn how to play ‘White Rabbit.’

This online slot game is visually exciting and tons of fun to play. Its theme is immersive and there are plenty of bonuses to keep you busy as you venture down the rabbit hole.