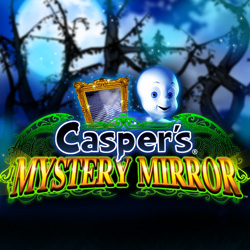 Now and again, everyone loves the thrill of something a little spooky.  But if you prefer your spooks friendly, then you’ll definitely want to buddy up with Casper!  You might already know him from children’s books, cartoons and films, but you’ve never joined him on an adventure quite like this!  Step through the friendly spectre’s mystery mirror and enter a land of thrills, chills, chuckles and winning chances, in this delightful slot based on a classic ghostly character.

Blueprint are a well-established and highly skilled online slots developer, based in Newark in the UK, but now owned by the GermanGauselmann Group.  They are well-known for their licensed TV and movie-themed games, which bring wildly popular characters from the screen to life in slots format.  They also cleverly re-invent classic computer games as slots titles, adding an extra element of winning fun to their existing charm.  Some of their most popular titles include:

You can count on a Blueprint game to be bold and uncluttered in appearance but vastly entertaining to play.  Many of their games have lots of inventive features and bonuses that enrich the gameplay and make it exciting and varied during longer playing sessions, and the recognisable characters and titles are sure to have appeal for all kinds of slots players.

The background to the game’s 5 reels is an eerie but beautiful forest at night, with a crescent moon winking in the corner and Casper’s mansion in the top right.  The reels are haunted by a selection of creepy symbols, including candelabras, colourful glowing 9, 10, J, Q and K symbols, Casper’s wicked uncles Stinky, Fatso and Stretch, and of course, Casper himself.  Spooky music plays as the reels spin, adding to the game’s atmosphere.

The game screen is simple and easy to navigate, but the bold artwork gives it a lot of impact.  There are easy buttons below the reels to set your total bet and get information on Paytables.  There’s also a very customisable Autoplay feature, so you can set up to 100 auto spins, sit back, and let the ghostly magic of the game take over.  A handy Loss Limit feature makes the Autoplay feature far less scary for casual players or those on a budget.

This game is a spine-chilling delight!  Its eye catching graphics and exciting bonuses combine to create a thrilling but friendly atmosphere, and it’s easy to personalise, which makes it a treat for both casual and more serious slots players.