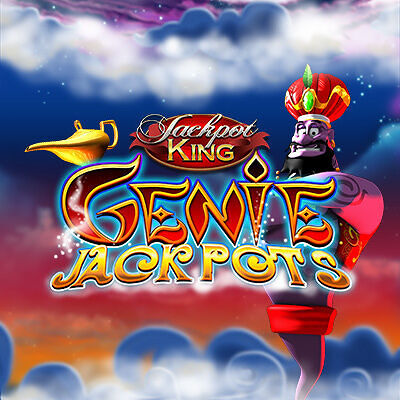 Genie Jackpots online slots casino game is a trip into magic with a genie who grants wishes. You’ll hear exotic music and the genie laughing. The reels are set against a sky filled with blue, red and purple. It’s as if you had stepped onto a magic carpet.

UK based Blueprint Gaming was acquired by the German Gauselman Group in 2008. They push the boundaries in the content of their online games, making successful slots that are wonderfully engaging to play.

Genie Jackpots has a 5 reel, 3 row, 20fixed payline format. The game is a jackpot game so the money bet by all the people who play the game contributes to the Jackpot which grows and grows until someone wins it.

Click the three lines and then the table to view the paytable or click ?to view the game rules.

You can play auto by clickingAutoplay, selecting a number of spins, a loss limit and a win limit and then clicking start. You can stop the autoplay at any time by clicking stop.

Or you can spin manually one spin at a time if you prefer.

Randomly the genie appears and triggers a 3 wishes power spin. Select a lamp to reveal a prize, one of which could be the progressive jackpot. Check the paytable for full details.

Triggered by two green bonuses on reels 1 and 3 and a magic carpet bonus on reel 5, you select a lamp to progress through the sky trail. You can keep going until you pick the word collect.

Genie Jackpots is a superb game. It’s full of fun with some great bonuses to keep you spinning.