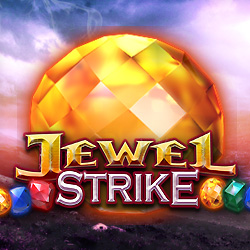 Jewel-themed slot machines are fairly common which means you need to put a different spin on them to appeal.  Blueprint Gaming have managed to do just that with Jewel Strike, a magpie’s dream of a slot with shiny jewel symbols emblazoned across five sparkling reels.  Although there are only 10 pay-lines, the Colossal Reels feature that Blueprint Gaming have come up with still gives players plenty of chances for huge wins with a randomly triggering 3x3 symbol appearing on the game-board.

Blueprint Gaming have also made sure that there are options for high-rollers and lower rollers with its Epic Spins feature.

Based in the UK, Blueprint Gaming is an online developer who comprise part of the prestigious Gauselmann Group.  This creative bunch have already built up an enviable portfolio of original online slots, as well as tapping into the zeitgeist with branded projects such as Deal or No Deal - What’s in Your Box and Viz. Some of their most played titles include The Pig Wizard and Wish Upon a Jackpot which can be played on more than 100,000 land-based terminals and countless online casinos.

Appearances are deceptive when it comes to Jewel Strike.  Although the fact that there are no scatter or wild symbols might seem like a weakness, the Epic Spins and Colossal Reels make up for this apparent shortfall.

Not unusually, the lower value symbols here are represented by playing cards 10, J, Q, K and A, while the premium symbols are glittering jewels in green, blue, red and amber.

Click the Epic Spins button at the bottom-left of the screen to select your stake.  The higher you bet, the more basic level symbols will be removed from the spins.  This works as follows:

Activated randomly during any spin in either the base game or during Epic Spins, Colossal Reels cause a 3x3 symbol to appear somewhere on the game-board, guaranteeing a win and possibly a huge one if the other two reels are feeling generous.

Overall, Jewel Stroke is a big-hitting online slot game that puts a twist on a common theme.  Blueprint Gaming have flexed their creative muscles in this one by doing away with the normal scatter and bonus symbols and rewriting the rules.  The Epic Spins feature opens the door to some big bets and huge wins, but how often you decide to play them will depend on your budget.  That said, the Colossal Reels feature is a visual delight as you watch the purple and blue flash clear, leaving a massive jewel in its wake.  Look out for the golden jewels as a screen full of them is worth a cool 5000x your stake.