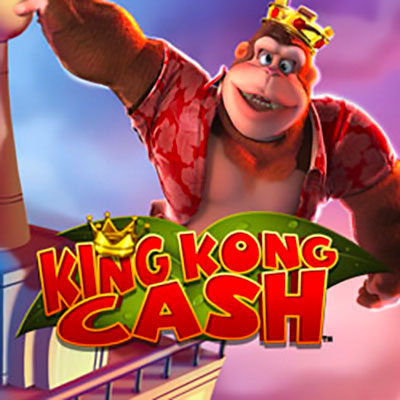 King Kong is a classic – everyone knows who he is (and if you don’t, where have you been?!). The 1933 film and 2005 remake have inspired all sorts - from merchandise, to video games, and now through to online casino games.

This is a child-like cartoon look at the action-packed film, and doesn’t take itself too seriously. You on the other hand, should take it seriously, as there’s a bunch of bonus rounds for you to get stuck into.

Blueprint Gaming are the geniuses behind King Kong Cash, and they’ve added it to their movie-inspired, cartoon-designed collection along with Paws of Fury (Kung Fu Panda), Wild Antics (Bugs Life),  The Pig Wizard (Harry Potter), and Wish upon a Jackpot (Cinderella). They’re the bee’s knees when it comes to animated yet high-quality slot games, with clever designs and beautiful graphics.

The game is set on Skull Island, with the mighty Kong lazing around on the left side of the reels. The reels have animal symbols (Rhino, Tiger, Bird and Crocodile) with the King Kong Cash and the wild being the highest-value symbols (both award you with 500 coins if you match 5 of them in one spin).

Wild Symbol – this is the barrel, and will substitute for any other symbols on the reels to make up a winning combo, except for the scatter. Match 5 in one spin and you’ll get 500 coins.

Scatter Symbol – this is Kong himself, and if you land 3 or more of him in one spin you’ll be awarded with one of 5 bonus rounds. You’ll spin a wheel and whichever you land on you’ll play.

Kong can also wake up from his sleep at any time in the game and will trigger one of 5 modifiers:

All in all, there are a lot of features to keep players occupied here – and it definitely doesn’t get boring! There are loads of opportunities to win, and the game even includes a gamble feature. King Kong Cash slot is definitely a game worth playing.