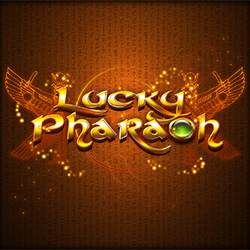 Travel back in time to the land of the Pharaohs, where pyramids towering overhead and concealed the vast riches that lay within the mighty tombs. The Eygyptains were famed for their incredible wealth and now is your chance to get in on the action and win some for yourself in this Merkur Gaming online slot game, Lucky Pharaoh. The reels are transformed into papyrus scrolls and the ancient markings and hieroglyphics of the ancient gods adorn the backdrop. The reels themselves are filled with ancient treasures, sapphires and diamonds galore.

Merkur gaming titles are distinctive in their simplistic yet engaging nature. Their slots tend to lack a complex back story or any complex symbols which allows the player to focus on the gameplay and really get into the slot. They have years of experience in creating these games and players have kept coming back for more. Their games are particularly popular with newer gamers due to the fact that they are compelling without being over complicated. Lucky Pharaoh showcases this simplistic yet fun to play and captivating style of online casino gaming.

In ancient Egypt, the wealthy lived in a separate area of town with high walls screening lavish homes. They would have courtyards, mats rolled over windows as shades, blue ceilings to mimic the sky, pillars in the shape of trees and many of these homes had as many as 70 rooms, complete with servant’s quarters. The way to stand out as the highest, most wealthy class was to wear collars of beads and jewels, and cuffs adorned with colour and precious stones on the arms and wrists. Striped and embroidered headdresses often signified the high social position of its wearer.

If you want to tap in to this ancient Egyptian wealth, now is your chance as you play Lucky Pharaoh. This game doesn’t have the usual features you would expect but the Action Spins Feature is the one to look out for to win big:

This spins will be played on 4 sets of reels at once, giving 4 chances to win each spin.

The player is presented with a pop up showing the current win value, as well as the option to play Action Spins on their current stake. The player may then choose to change their stake and play more or less Action Spins (dependent on stake) at the new stake value.During Action Spins the Lucky Pharaoh Mystery Symbol is active.

During any spin where a Mystery Symbol appears in view, a symbol is chosen at random to be displayed in all Mystery Symbols in view

This simplistic yet captivating online slot game is fun and easy to get to grips with. There may not be many features but the action spins give the player the chance to take a risk and maximise their wins.