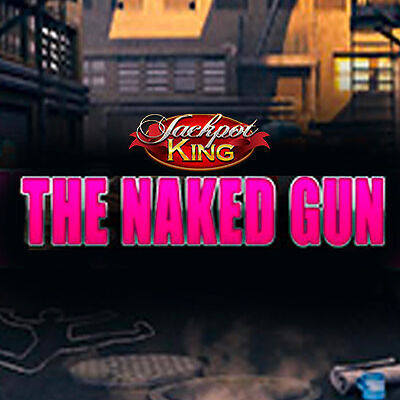 You’re bound to recognise this one! Based on the iconic 1980s movie starring Leslie Nielson, this slot by Blueprint Gaming is every bit as exciting as the film it’s based on. Telling the story of Frank Drebin, a useless police detective, Naked Gun is now recognised as one of the funniest spoofs ever made.  Everything in the game relates to the movie from the police office backdrop to the famous voice-overs and character symbols.

The office is typical of a detective workplace and features a cluttered desk and wanted poster, while the slot’s classic symbols are easy to spot, considering you’ll find the likes of A, Q and 10 in a fluorescent pink. So get ready for the return of your favourite characters with a game dedicated to slap-stick comedy and hilarious gags.

Blueprint Gaming have been around for some time now, and by the looks of it they’ll be around for a lot longer. Known for their stand-out gaming features and their movie-focused slot, players everywhere sing their praises. That’s right, among their lengthy catalogue of games, you’ll find a good selection of video slots dedicated to some of the world’s most iconic film and TV series. These include big-hitters like Casper, Austin Powers, Naked Gun, and Top Cat. However, some of their best titles are original storylines such as The Pig Wizard and Duckula.

There are some great winning potentials in this game thanks to its Free Spins and progressive jackpot. Played across 5 reels and 3 rows with 20 paylines, the layout is pretty standard. Make sure you know which symbols pay out the most, in this case they are characters Franks Drebin, Jane Spencer, Captain Ed, Hocken, Vincent Ludwig and the Naked Gun logo, followed by the more traditional symbols of J, Q, K and A. Then there’s the WILD, which is the flashing police car and the SCATTER, which is detective badge.

This game also has two bonus features – Roaming Wild and Bonus Symbol. The roaming wild is activated when 3 or more WILDS land across your reels, this will result in a Free Spin while the WILDS move around with extra ones being added. This has the potential to create more wins. On the other hand, the Bonus Symbol feature means extra bonus symbols can be added to the reels, giving players more opportunities to release the main feature. We can’t forget the progressive jackpot either – this comes into play when 5 jackpot king icons appear across 5 reels. If players manage this, they’ll be taken to the Wheel King where they can either secure the progressive jackpot or multiply their winnings.

This may seem like a strange theme, but it works! This slot takes the film’s most prominent scenes and turns them into an extremely fun game. As much as fans of the movie are more likely to enjoy it, it’s fantastic bonus features and varied ways to win doesn’t exclude other gamers.