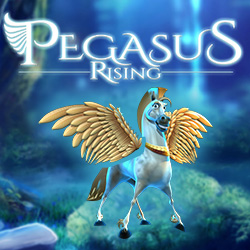 Blueprint Gaming have done it again with this graphically stunning, super immersive online slot game based on winged horse from Greek mythology, Pegasus. The game is set in an enchanted and mystical forest with beautifully depicted characters of Poseidon, Zeus, Medusa and the sea creature, The Kraken. These characters bring the game to life, as does the fairy tale audio, with the neighing of Pegasus as he appears on the reels but perhaps the most striking element of the game is when the beautifully animated horse flies straight towards the screen. It is hard to imagine how anyone would not fall in love with this game, as it pulls you in from the first spin.

Blueprint Gaming have made quite a name from themselves over the many years they have been providing world class online gaming entertainment. They were acquired in 2008, by the Gausselmann group which gave them a more prominent role in the industry and allowed them to really spread their wings when it came to developed high end productions. Pegasus Rising is just one example of how Blueprint have displayed spectacular talent in graphic design and animation.

In ancient Greek mythology, Pegasus was a divine winged horse, who sprang from the neck of the decapitated Gorgon, Medusa. Pegasus was later tamed by Bellerophon and agreed to let him ride into battle on his back in order to defeat the fire breathing monster, Chimera. When Bellerophon attempted to gain enter into the heavens, Zeus caused Pegasus to throw him from his back in disgrace. The winged horse was the thunderbolt bearer for Zeus himself before being make, by Zeus into a constellation in the sky.

If you want to ride atop the mighty Pegasus, head on into thus online slot game, hop on and get ready for a wild ride.

When the Pegasus Wild lands anywhere in view to trigger the rise of the reels by one column adding an additional 10 winlines.The Reels can go up to 8 symbols high playing across 80 winlines.

This Blueprint gaming Greek mythology themed game is a masterpiece. It is so much fun to play, has great features and even better visuals. The cartoonish style ensures a modern fresh feel to the online slot game and players will be coming back again and again to play Pegasus Rising.