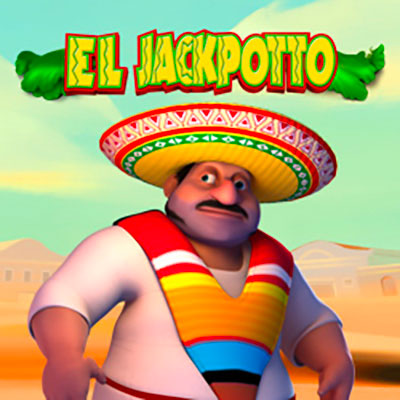 Burrito vendor by day, luchador by night, enter the fantastically funny world of Senior Burrito and watch out for his random visits to the reel with different surprises for the player! The engaging audio and beautiful graphics will have you immersed in the game and into the heart of Mexico to glimpse the fantastic and colourful world of Mexican wrestling. The landscape is a dusty Mexican town and the symbols on the reels include sugar skulls, the luchador’s belt, authentic Mexican instruments and piñatas. Watch out for the masked wrestler who may just help you to win big!

As part of the Gauselmann group, Blueprint Gaming has a wealth of experience with over 50 years of industry experience behind them. They have become synonymous with bright, colourful cartoonish games, with fun themes and engaging features. El Jackpotto certainly is an example of this audio and graphic brilliance and is a title that gamers will come back to time and time again.

Lucha Libre is a form of professional wrestling native to Mexico and the fighters are known as luchadores. This kind of wrestling is a form of entertainment as well as a professional combat sport. The fighter don colourful masks and fight in the manner of freestyle wrestling with rapid sequences of holds and high-flying manoeuvres. Lucha Libre wrestlers usually come from an extended family of wrestlers who often fight in teams. The sport has made its way into the United States and one such wrestling scene is Los Guerreros. This game brings together the combat sport of the luchador with the colourful Mexican culture, with the fun and light-hearted Mexican music.

So, grab your sombre and get ready to immerse yourself into true Mexican Culture as you play, El Jackpotto:

- Mustard Wilds - El Jackpotto covers the reels with Mustard and it drips down to create a stacked wild.

- Tomato Sauce -  El Jackpotto pops up and splashes the reels with Tomato Sauce, to uncover a mystery symbol.

- Bonus Boost - El Jackpotto farts on the reels and additional bonus symbols  will be added for more chances to trigger the bonus.

- Chilli Wilds – Up he pops again and squirts the reels with random red-hot chilli symbols.

- Fart Shuffle -  El Jackpotto farts on the reels (AGAIN!) to cause the reels to shuffle creating multiple wins.

This game is flamboyant and fun, bringing Mexico to your screens in burst of colour with engaging features and tons of fun bonus’s.