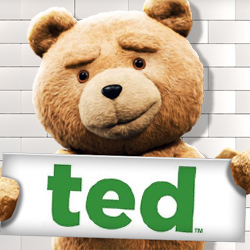 Imagine if your favourite teddy bear came to life and became a cool best friend, with loads of inappropriate and crude charm, and who loved to kick back with a beer? That’s where John Bennett found himself when his teddy bear came to life – he grew up with a real life bear that he went on hilarious adventures with him, pulled girls with, and generally had a good time with.

Here you’ll get to meet Ted in this slot game by Blueprint Gaming, and go on your own adventures with him. John’s trying to choose between Ted and his new girlfriend, so maybe there’ll be a spot open to be Ted’s new BFF?

Blueprint Gaming are based in the UK, and develop high-quality, innovative casino games with incredibly impressive graphics. Their games are available to play online, via mobile and also on land across the UK, Germany and Italy. Love a cheeky animal game? Then after playing the Ted slot game, try out Top Cat, Paws of Fury or King Kong Cash.

When it starts off, Ted is sleeping (probably sleeping off a hangover) and it’s up to you to try to wake him up. You can spin the reels yourself, or you can kick back and press auto play, and watch it do the hard work for you. You’ve got 20 pay lines on this slot game, so there’s a fair few chances to win. If Ted wakes up during a round then you could get one of six Ted Modifiers:

Wild symbols – these can be substituted for any other normal symbol on the board, and if you land 3 or more of these in one play you’ll unlock the bonus rounds. Ted wilds get you 5 free spins.

Wheel of Fartune – spin the wheel and you’ll win features, multipliers and more spins in this round.

Big money – you get a bonus carousel, pick up the sale signs to win either respins or to collect winnings.

Ted free spins – is played on a different reel slot game, and you can win more free spins, cash prizes, and extra wild cards. The big money bonus can be triggered in this round too.

Gamble – are you a risk taker? The option to gamble your winnings will be given to you after every win.

Although there are a lot of levels to this Ted slot game, that’s what keeps you engaged, as you’re not sure what you’re going to get next. A fun remake of the hilarious Seth McFarlane film, this is a cheeky slot game that you could play for hours.