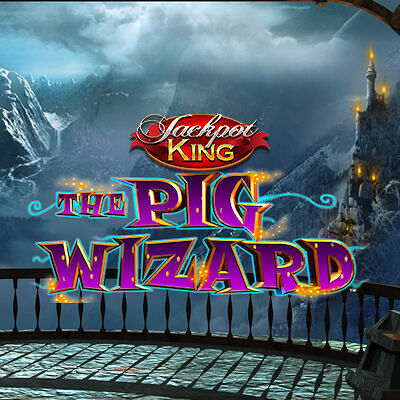 Double, double, toil and trouble; fire burn and cauldron bubble. If you’re still waiting, patiently as ever for your letter to Hogwarts, then why not kill the time by playing with a different kind of hog – the Pig Wizard (aka Harry Trotter). If only they thought to add in other characters – say, Albus Dumbleboar or Hogrid (we could go on for hours).

Cast yourself in to a world of spell books, wands, magic and mystery as you play the Pig Wizard slot game to an upbeat, wizard-type soundtrack in the background.

Blueprint Gaming are game studio that pride themselves on fun and creative online games, both original inventions, and games that are inspired by brands their audience know and love. Like the Pig Wizard’s nod to Harry Potter, their Top Cat game, or their Paws of Fury nod to Kung Fu Panda. They’ve even been inspired by those classic games users used to know and love like Worms, and Bejewelled.

Get ready to be accepted into wizard school after you’ve played this game, as you’ve got five reels, up to 20 paylines, magic symbols, and some mystical bonuses to get you showing off your wizarding skills. Neville Pigbottom ain’t got nothing on you (hmmm, maybe we should stop that now). First you’ve got your higher value symbols – a wizard’s hat, spell book, cash, and gold coins. Then you’ve got your Pig Wizard wild and your Pig Bonus icon.

The Bonus – this round comes in two parts. The first part is the magical map bonus, which is triggered when you land the bonus icon in reels one, three or five. Once you’ve activated the bonus round, you’ve got to just one of four bonus rooms:

A quirky game paying homage to the ever-popular wizarding world of Harry Potter, the Pig Wizard offers a unique game playing experience to the users by providing various bonus rounds that aren’t typical of a classic slot game. This keeps the game fresh and interesting, never boring.