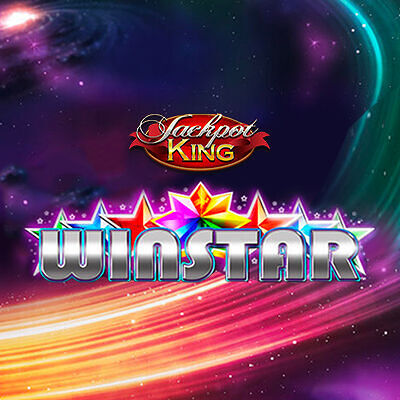 When you wish upon a star, do you wish for the chance to win big?  If so, then Winstar online slot game might just be for you.  This little corner of the Blueprint Gaming galaxy has lots of stars to wish upon.  See if, by giving the reels a spin, you can make some winning constellations.  Who knows what lies in your slots horoscope?  Could it be wealth and fortune?

Based in Newark in the UK and now owned by the huge German Gauselmann Group, Blueprint are constantly expanding their varied library of quality online slots content.  Whether their games are bold and simple in concept, or more detailed and innovative, there’s something in their catalogue for every kind of slots player.   All their games are characterised by high-quality graphics, attention to detail, and consistency in theme, that makes them amongst the most popular slots games on the web today.  You’ll know you’re playing a Blueprint game, because the bonus features, too, will be cleverly integrated into the game’s theme.  Often these bonus features are simple but highly innovative, such as the transforming Star symbol in Winstar.

Some of Blueprint’s most popular titles include:

Winstar’s 5 reels are set against an atmospheric background of swirling stars and galaxies.  This backdrop is subtly animated, too, to give the impression you’re drifting in deep space.  The layout is simple and bold, and the 5 dark reels stand out nicely against the glowing background.  Symbols, too, are bold and impactful, and include large, glowing, neon 10s, Js, Ks, Qs and As in different colours.

Players will be pleased to hear that wins do not have to start from the far left reel, but rather, any 3 or more symbols anywhere along a win line will yield a win.  This makes winning opportunities a lot more flexible.

There are easy buttons below the reels to adjust your bet amount, and set between 10 and 50 Autospins, if you’d like to let go of this spaceship’s controls for a while.

Classic 90s arcade-style sound effects stand out because of the lack of soundtrack, and punctuate spins and wins with a nice impact.  The silence in between spins also lets casual players multi-task on their computers, popping back for the odd spin, without having to turn the music on and off.

Winstar has the feel of a classic arcade game.Its look and gameplay are refreshingly simple, with just a few really shining bonus features.  The unique Winstars feature, in particular, keeps the gameplay fresh and twinkling.A star turn from Blueprint.