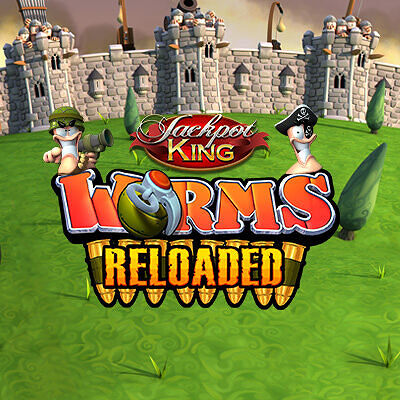 Worms is one of those rare PC games that can safely be called a retro classic.  Relive the madness of the worm-based-war themed action with this online video slot from Blueprint Gaming.  The Worms Reloaded battle between player and prizes commences on a game-board resembling a battlefield, with five reels and twenty pay-lines.  Die-hard fans of the grubby franchise will not be disappointed by the use of nostalgic cartoon graphics and authentic sound effects.  The gameplay is further enhanced by four unique bonus rounds and a progress jackpot - to the victor the spoils.

Blueprint Gaming pride themselves on rewriting the rules when it comes to online slot games.  This UK-based developer form part of the much lauded German Gauselmann Group and have cemented their reputation as one of the most innovative studios around.  Blueprint Gaming bring original concepts to life as well as third-party branding with games including Genie Jackpots, Deal or No Deal - What’s in Your Box and Wish Upon a Jackpot.  Gamers can play these titles online and on 100,000 physical terminals worldwide.

Blueprint Gaming have done the original Worms games justice by paying homage to the much-loved weapons in their choice of symbols.  Although lower value symbols comprise J, Q, K and A, premium symbols are represented by the shotgun, missile and fire-punch.  Watch out for the comically-dressed worm in a jester’s hat as this symbol is wild and substitutes for all others except for the grinning Bonus symbol.

Spin a jester bonus symbol on reels one and three together with one of four unique bonus symbols on reel five to trigger the bonus round.  Again, each game is a faithful recreation of the original gameplay:

Set off those bombs to boost multipliers for big wins.

Avoid the mines in this trail-like bonus to nab Big Money.

This blast from the past flies above the reels turning symbols wild.  The wilds will remain in play until they are destroyed by rival factions.

Watch as the bomb in the game’s title explodes to award a random grenade bonus.  Players will receive a Banana Bomb, Holy Hand Grenade, Concrete Donkey or Teleporting bonus, each of which awards spins, introduces more wilds or increases the chance of entering the Bonus Feature round.

Worms Reloaded has been fully optimised for all iOS and Android mobile devices.

The idea of warring worms might still seem like an odd concept for a best-selling game, but it just works.  Worms Reloaded packs all the firepower of the original games while adding in the opportunity of winning some serious cash.  By packing in four different bonuses and resurrecting legendary weapons like the Super Sheep, Blueprint Gaming has really done this online slot justice.  As well as winning the battle, you could also win the war by randomly triggering a chance to win a progressive jackpot (previously worth £1.6 million!).