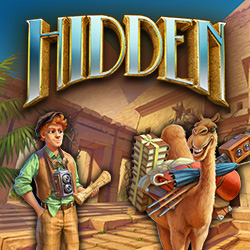 A new slot game from some of our favourite up-and-coming online casino game developers, ELK Studios has been brought to our attention in the form of Hidden, and we just had to play it.

With five reels presenting a pretty cool 178 paylines and a jackpot of 2150x your stake, there isn’t a huge amount of winning potential but it’s not crazy volatile either, meaning that the frequency of wins is better than some other online casino games going around at the moment.

You can play Hidden from anywhere between 20p and £100 per spin, on any of your devices. So, you can take it on the go on mobile or play from the comfort of home on a computer. Do either of those at top online casino UK site 666 Casino today.

About ELK Studios - the Pioneers Behind Hidden

Stockholm-based online casino games developers ELK Studios have been on our radar for a little while now thanks in particular to their awesome graphic design. Their slots are visually immersive and make for great fun, and the winning potential within them is not half bad either.

The Swedes sure know how to make online casino games, and we knew that since playing possibly the most famous of their casino slot games, Ho Ho Tower, a little while back.

Play ELK Studios games from today or those coming up in the future, you’ll be sure to find them at 666 Studios.

The Pyramids of Giza is the physical location of this online casino game, and it’s presented in the lovely graphics we’re becoming used to seeing from ELK Studios.

The symbols here are made up of the low valued Royals, followed by the Egyptian themed symbols which are camels and the Sphinx, as well as the two main characters of the story of the game, Benjamin and Professor Taylor.

The Flashback Re-spins feature is the first of two cool bonus features available to players in Hidden. Land three sticky wilds on the reels 1, 2 and 3 (and remember, you can do this over multiple spins as the wilds are sticky) to earn 3 re-spins.

The Treasure Room Free Spins feature is the second of the two which is triggered by landing three scatter symbols anywhere on the reels (the scatter symbol is the magnifying glass, FYI). You only get five free spins with this unfortunately, although one symbol will become giant (2x2 in size), meaning that wins become much easier.

You can re-trigger free spins during Treasure Room Free Spins, as one magnifying glass scatter landed equals one extra spin.

Our Take on this Online Slot

The bonus features aren’t incredibly exciting with Hidden but overall it is a good game to play. The graphics make it, and the symbols in the base game pay pretty well too. You can get playing it at 666 Studios with the best online casino games on the market.