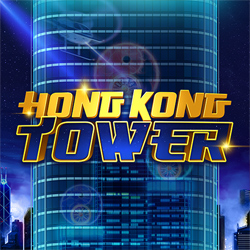 Take to the stunning neon city skyline in Elk Studios’flashiest and most futuristic video slot yet. Leave behind the bland monotony of other video slots with the same old bonuses and sound effects, and enter the world of Hong Kong Tower: the next level of immersion for online gambling. With one of the best bonus games in an online slot to date, you would be hard pushed to find a more exciting and rewarding game than Hong Kong Tower.

Elk Studios is an online casino game developer from Stockholm, Sweden. They have a wide variety of online slots and casino games, dominating the market in both desktop and mobile games. They attribute their success to a blend of advanced mathematical algorithms and ambitious art design. If you enjoy Hong Kong Tower, why not try other stunning offerings such as Wild Seas, Route 777, Sam on the Beach, and DJ Wild. You can find their games on Vegas Slots Online, Casumo, Casino Kings, and many more big name online casinos.

Hong Kong Tower combines oriental symbolism with the futuristic look of urban Hong Kong. Symbols comprise the four elements – fire, water, earth, and air – alongside lotus flowers, diamonds, yin and yang icons among more, all rendered in a sharp, neon art style straight out of an eastern sci-fi movie. The soundtrack involves a futuristic spin on the classic slot machine sound effects, complete with an epic cinematic score during bonus games and big wins. There is a slew of bonuses to keep gameplay engaging, including the mystery symbol: a game logo, which spins around to reveal another random symbol. Not only that but a revealed bonus symbol counts as 5 bonus symbols. Bonus symbols are golden yin and yang icons, granting one of the best bonus games seen on video slots when 3 appear on the reels. If 4 or 5 appear, you will also get an extra life or two respectively. Wheels of the Sky is Hong Kong Tower’s incredible bonus game, which has you spinning giant wheels mounted on skyscrapers to win points. If your land on the level up section, you’ll be upgraded to the second and third wheels, which award even higher prizes. That’s where those extra lives come in handy.

Split between the main reels and Hong Kong Tower’s bonus game Wheels of the Sky, this neo-classical video slot from Elk Studios is a master of a slot game. Everything from its stunning aesthetic to its gripping soundtrack represents the pinnacle of online video slots. Whether you’re a casual or hard-core slot player, Hong Kong Tower should be one of your go-to games.