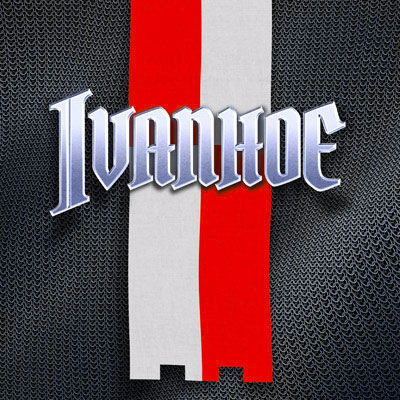 Based on the 1820 novel by Sir Walter Scott, Ivanhoe is an incredibly creative, retro-styled video slot from the clever folk at ELK Studios.  The first unusual aspect of this video slot is its three-reel format with 17 pay-lines.  The game’s artists have really gone to town with dot matrix graphics that showcase the medieval action perfectly.

The sounds of battle cries and swords and shields clanking add to the ambience, while potential wins of 3000x your stake during the final round of the Ivanhoe bonus make you feel that you really are on a heroic journey.

ELK Studios combine beautiful art with cutting-edge technology to create distinctive online games from their headquarters in Stockholm.  Founded in 2013, ELK Studios have already carved out a reputation among the online gaming community as a company who think outside the box.  These are just some of the games that have earned them these plaudits:  Route 777, Wild Toro, Hidden and, most recently, Hong Kong Tower.

Harkening back to a time when chilvary wasn’t dead, Ivanhoe also takes its design cues from gaming days of yore. The game board itself consists of three backlit reels, underlain by red and yellow dot matrix visuals in the centre of a medieval joust scene.

Game symbols include a cherry, lemon, double black bar, blue seven and the King’s crown which is wild and substitutes for all symbols except for the Ivanhoe scatter bonus flag.

Spinning three Ivanhoe bonus flag symbols triggers the five-stage Ivanhoe Bonus, giving you five free spins to get you started.  Extra spins can be won during any stage by spinning an Ivanhoe scatter flag.

The bonus plays out on a pinball-style matrix displays above the reels which broadcasts your various battles, while a meter underneath the reels shows how many points are needed to progress to the next stage.

The further you progress, the greater the multipliers.  The five stages are as follows:

It takes nerves (and weapons) of steel to make it to the final bonus stage, but those who do can potentially win up to 3000x their stake!  Don’t be fooled by the retro stylings either because Ivanhoe is available on mobile and desktop devices.

Basing an online video slot on a canonical nineteenth century novel is quite a left-field concept, but Ivanhoe is a brilliantly themed game with a bonus that is as absorbing as it is different.  Those who long for the olden days where pinball arcades were ten a penny will love the dot matrix display and thoughtful use of a points accumulator to unlock bonus stages.  The potential of winning 3000x your stake in the final bonus round also ups the ante meaning that you might find yourself cheering your knight on to victory.