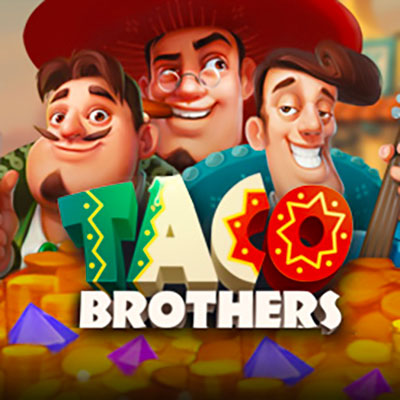 Hola mi Amigos and welcome to the village of Santa Maria where the infamous Captain Diaz has stolen all the tacos and pesos from the unlucky inhabitants.  You must join the Taco Brothers Paso, Pepe and Pico on this five reel, 243-betway online slot adventure to empty Diaz’s vault and save the day (after pocketing a generous finder’s fee).  No epic adventure is complete without a beautiful maiden, so keep a look out for Captain Diaz’s daughter who will help you through the bonus rounds in this uproariously quirky game from ELK Studios.

While many online slot developers release quality games, very few have the creative spark that turns the ordinary into something special.  Whatever this ingredient is, ELK Studies displays it throughout its portfolio of games.  Despite only being established for five years, this Stockholm-based studio have already built up a portfolio of aesthetically beautifully and immensely playable games, each with its own compelling story.   Not only that but they have introduced betting strategies into many games which help players to maximise their winnings.  If you haven’t checked them out already, take a look at Wild Toro, Ivanhoe, Hong Kong Tower or Route 777 among many others - you won’t be disappointed.

Put simply, Taco Brothers is one of the best online slot games there is.  The story is beautifully compelling while the aesthetics perfectly suit the theme and are charmingly rendered.

Lower value symbols include a guitar, a cactus and a bottle of tequila, while fetching portraits of each of the Taco Brothers make up the premium symbol line-up.  It seems that some parents do have favourites because Paso is the most valuable, Pepe is in the middle and poor Pico is worth the least.  The golden bell symbol is wild and substitutes for all symbols except for the bonus Safe and the Taco Brothers Wild which acts as a running wild during the bonus round.

The Taco Brothers are a generous duo.  Spin two bonus Safe symbols and you will receive two respins for another chance to land the bonus.

Spin three Safe symbols to trigger the Wild Escape bonus.  A Taco Brothers Wild will appear on reel five with each spin, making it’s way leftwards.  The Exploded Safe multiplier is applied to all winnings.

Watch out for Captain Diaz as he gatecrashes the party to imprison a Taco Brother, as once they are all caught the round will end.  Meanwhile, the faithful Senorita will try and thwart her father’s evil attempts by releasing brothers and pushing them out of harms way.

Whether you’re a fan of Mexican food or not, Taco Brothers from ELK Studios is a feast of gaming entertainment that needs to be tasted.  The characters are all likeable (except for Captain Diaz who deliberately isn’t), while the features are great fun.  You could almost forget the massive 400x jackpot and the 96.30% RTP.. but not quite.