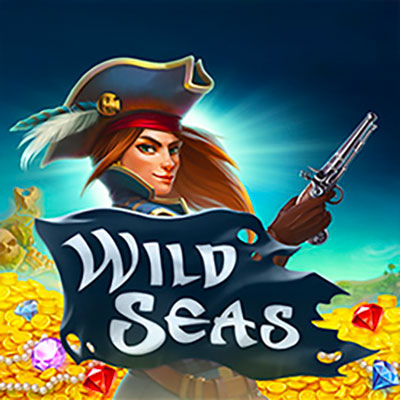 If you are familiar with some of the famous pirate stories that you were told when you were a child, it's impossible for you to not remember the great story of Anne Bonny, the great female pirate that managed to conquer all of those who have betrayed her father, and steal a big pile of booty at the same time.

Now, if you are familiar with Elk Studios, you'll be excited to hear that they have just released a new slot game that's aimed to make you feel like you're on an adventure across the Seven Seas. That game is called Wild Seas, and you won't be able to resist from playing this game again once you've experienced it the first time!

There are 3 important aspects that every single iGaming developer on the planet need to base their products on: concept, art, and mathematics. The brilliant minds behind Elk Studios always put their effort into making sure those 3 aspects will not fall short whenever they bring an idea to fruition.

Because of this methodology, they're able to produce over 100 transactions from their servers, to attract over 1000 players, and to retain them, which is a pretty hard thing for most developers to do. If you have a look at all the positive reviews they've received from some of their slots like Sam on the Beach, Ho Ho Tower, and Champion's Goal, there is a big chance that this new game that Elk Studios has developed will deliver you high entertainment and winnings!

As you take on the role of Anne Bonny, your mission is to avenge your father and break the convoys that get in the way of your prizes. On the 5x3 reel grid that you'll need to keep looking through your telescope, you'll come across some of the base symbols you'll need to land in a matching combination to receive your winnings.

Base symbols such as the gold skeleton coins, the silver East Indian Trading Company coins, and the bronze octopus coins will give you low payouts, and the green captain, blue captain, and Anne Bonny herself will give you high payouts. But, ahoy there! There are some special symbols that you will need to watch out for while you sail through the seven seas and 2 levels.

The fact that this game has 2 levels for you to play makes this slot quite unique from all of the others that you may have played before. And the fact that there are many SCATTERS that activate a lot of BONUS FEATURES makes Wild Seas all the more attractive for players worldwide to load up on their laptops, tablets, and smartphones. You'll be able to make some big winnings with it's whopping RTP rate of over 96% if you decide this game a chance!