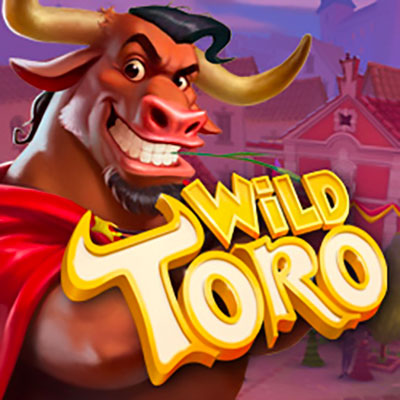 If you’re a fan of all things Spanish, you’re going to love Wild Toro. Set in a traditional Catalan village, everything is made to look authentic from the small houses to the dangling bunting and the moving clouds. But there’s no such thing as beware of the bull in this game! Inspired by the controversial sport bullfighting, this slot takes the side of the bull. In fact, these powerful creatures run the show in this slot and could be the key to your fortune.

There’s more to this story than first meets the eye, Wild Toro is about a rivalry between the matador and the bull. Once good friends, things turned sour when Metador Diaz Jr betrayed his animal friend. So, don’t be surprised to see the bull rage when the matador appears on the reels.

Elk Studios have only been around since 2012, so as you can imagine they haven’t got a massive catalogue of games compared with more established gaming companies.  However, all of their titles to date are of the highest quality. They are also celebrated for their avant-garde way of thinking, especially when it comes to their mathematics. This is evident through some of their most popular games including The Lab, Electric Sam and Champion Goals, all of which are cutting-edge in their bonus features and visuals.

Before you head into the arena, you’ll need to set your bet levels. You can choose from three betting strategies, these are – Optimizer, Leveller, Jumper and Booster. Each will offer something different, so make sure you choose the right one for you. This 5 reel, 4-row set-up comes with 178 ways to win, so whether you’re relying on beginners luck or years of experience, you’ve got a pretty good chance of winning.

The games also comes with walking WILDS, this adds some extra excitement to the reels as players watch the WILD (Toro) move from right to left, creating more winning opportunities. Meanwhile, the game’s logo is the WILD and substitutes for all other symbols in the game, apart from the Matador and the Toro. There’s also the Matador Re-Spin, this is triggered when three Matadors land across any of the reels, leading to 3 Free Spins. You can also score additional spins if more Free Spin symbols appear on the reels, but the amount of spins will depend on the amount you land. The highest level symbol is the rose symbol, with 5 paying out an impressive 1,000 coins.

This game has a lot going for it, yes it has extremely eye-catching reels, but that’s not the only reason punters love playing it. Wild Toro is so much more than its high-quality graphics, it also has some extremely creative features, and its high prizes help too. What’s more, the slot looks good on any device, which is great for those who prefer to use their mobile or tablet. On a whole, the game’s Spanish vibe and flamenco-sounding soundtrack all add to Wild Toro’s universal appeal.