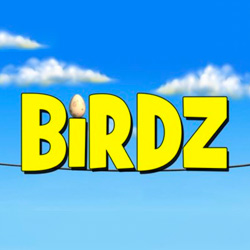 Birdz is a fun slot full of fluffy bonus features and intriguing design. Developed by Games Warehouse, this slot has a truly unique theme with captivating graphics and cartoon-like symbols that remain fresh unlike many of the other online slots on the market. The reels have a unique design with the lines represented by birds sitting on wires, stretched across telegraph poles. They aren’t however, happy to just sit still and are alive with individual animations like cheeping, flapping and other movement to immerse the player further into this world.

As a result, the reels don’t move in a traditional way. When the player spins the reels, they all fly away in a panic! But don’t worry, they will eventually return in a new formation. The comical birds atop the wire are highlighted by a blue sky, with passing airplanes and hot air balloons. While a fairly simple idea, it is a creative one that brings a fresh take to the standard online slot format and defines what Games Warehouse is all about with big bonus features and great 3D graphics.

This Derby-based developer makes games primarily for the UK audience and specializes in making land based entertainment machines for bars with a SWP (skill with prize) games machine called Paragon.

Founded in 2002, Games Warehouse is one of the UK’s major pay-to-play contributors in the market. There are more than 10,000 of the Paragon units installed across the UK offering low-stakes and moderate cash prizes. The unique side is that often the players must rely on their own skill and knowledge through a variety of trivia based games.

Birdz is fortunate to have more features than you can shake a feather at in addition to a long list of bonuses to spin for.

In ‘Bird Blitz’ the sky behind the reels suddenly turns grey with lightening arcing across the sky. The birds hurriedly desert the wire and return again shortly much like a normal spin. In this instance however, the birds will repeat the sequence until a prize is won.

‘Shotgun’ is another bonus feature wherein a shotgun appears and prepares to shoot the poor birds off their wire perch, providing surprisingly viscera-free slots for new birds to fill.

‘Zap’ bonus put those feathered critters in the firing line once again, with one line out of three becoming electrified. The birds on this row will sadly disappear with the birds above taking their place. While the player may mourn their passing, it is invaluable for injecting more chances to win.

‘Pecking Order’ takes way the 3 lowest value birds on the wire, replacing them with higher value birds. No win is guaranteed but again, success chances can be enhanced through this bonus.

The ‘Scarecrow’ game scares the birds away, with new ones returning who have not yet encountered it. ‘Cracking Wilds’ is the final bonus game that also rids the player of all symbols on the first three reels, replacing them with wild symbols.

Birdz is a very creative game that offers tons of replayability for just the bird animations alone. With a huge roster of bonus games, bird lovers and fans of unique slots will no doubt return to this one of a kind experience.