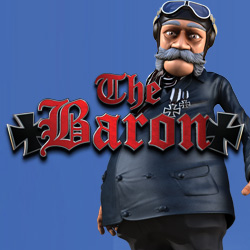 If you're someone that has a very keen interest in aviation, or anything relating to aerodynamics, you won't be able to keep away from The Baron, the online slot game that has gained a lot of recognition in the casino market.

You'll get the opportunity to fly some of the 1st planes ever invented in the 20th century, as well as collect all of the large prizes that you can grab while you're flying through the skies.  Additionally, all of the audio and visual effects that Games Warehouse implements in this game will take your breath away! (Yes, that was meant to be a pun from the original soundtrack from Top Gun)

Not all of the best iGaming developers in the world are based in a big capital city in the USA. They're found all over the world, even in a small county in England where no one would expect. Games Warehouse is based in Derby, Midlands, and has been making quite a lot of prolific and profound online casino games since 2002.

They like to keep their players happy with all of the high quality entertainment and big jackpots that get paid to them. That is why they work so hard into researching what each of their players look for in a game, manifest a product that gives to them what they look for, and distribute it across the UK so that they call can gain easy access to that product via laptop, tablet, and smartphone.

Some of their other games like Cash Commander, Castle In The Clouds, and Fishin' Impossible have gained a lot of great reviews, so you can be sure that you won't leave disappointed or empty handed after playing The Baron!

One of the great aspects about this slot game is that you have enough freedom to customise and organise your settings before spinning the 5 reels on your grid, even though the slot is has a set of classical rules that you need to abide by.

Like in any slot game, you can make a win by landing, 3, 4, or 5 matching combinations on the reels from the symbols that would show up on your screen. You'll see the conventional card values like the 10s, the Js, the Qs, the Ks, and the As which are the low paying base symbol. And you'll also see the big cross and The Baron logo which are the high paying base symbols that emphasise the aviation theme.

The number of base symbols that appear on the reels may seem quite limited, but the special symbols will definitely not limit the amount of prizes you could win.

This may might not be as complex as some of the other video slot games that you may have played in the past, but the way that the bonus games and free spins modes are implemented, there's a good chance that you'll be playing The Baron for at least an hour...at least!

And when you're soaring through the skies in some of the world's first planes, there;s a good chance that you'll be playing this online video slot game until your bedtime! Turn into the pilot you've always dreamt of becoming, and make some large winnings by turning on The Baron on your favourite device now!