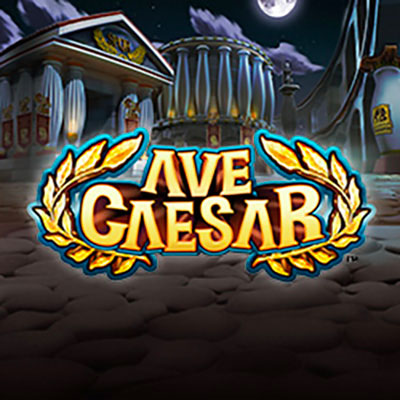 The Roman Empire may have fallen, but its influences still remain: the Colosseum, the Forum, and most importantly, this slot game. Transport yourself into the world of the mighty Roman Empire – a world full of grandeur, great suits of armour, and Julius Caesar.

This five-reel slot game is set on a backdrop of Roman architecture, with symbols such as a Grecian lady, legionnaires, centurions, Roman numerals, and of course, Caesar himself.

Leander Games are an independent gaming company that have been around since 2002, delivering high-quality animation that sets them a foot above some other gaming providers. Their games can tell a story, and they often do – leading their users into a full-immersive experience, instead of your standard online game. If you appreciate games based on familiar characters like Caesar, then give Apollo and Scrooge’s Jackpot a go.

A five-reel game with twenty fixed paylines, Ave Caesar is packed with bonus features, to get you more winning combos. The highest value symbol is the games logo, followed by the legionnaire, the centurion and the lady.

Wild symbol – Caesar is the wild and can substitute himself for any other symbol on the reels, except the scatter symbol.

Scatter symbol – this is the symbol with SPQR written on it, standing for Senatus Populus Que Romanus. By landing three of these on reels one, three and five, you’ll trigger one of four bonus rounds.

You can gamble your bonus round with another shot at the features – this shot is literal, and you’ll use a bow and arrow to try to shoot for another feature.

You can be awarded any of these four modifiers randomly at any point of the game:

A lot of bonus features, which keeps the game interesting. It’s also full of high-quality animations and graphics, making this an enjoyable game to play. Definitely not just a standard slot game.