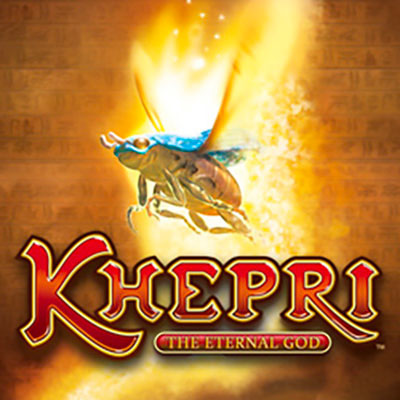 There’s a myth that was started in ancient Egypt that describes an insect God by the name of Khepri – he’s depicted as either a scarab beetle or as a man with the head of a scarab beetle, and is still thought of today… the majority of Egyptian temples have a statue of Khepri in them. Now he’s also thought of in the online casino world, as this slot game by Leander Games is based on his myth.

Leander Games have great ideas and use them to produce some really innovative games – ones that might make you think they’ve been around longer than 2008 when they were founded. They love a variety of bonus rounds, so you can bet if you’re playing a slot game created by them you’ll more than likely have something highly interesting to play. Want to try out some more of their games?

Set inside a temple on a background of hieroglyphs, these reels have a distinct Egyptian feel to them (of course) with symbols of owls, the sun, the eye of Horus and the ankh. The eye is the most high-value of these symbols, match 5 of them and you get 300 coins. However the highest value of all of the symbols is the wild, which awards you 400 coins if you match 5 of them. You’ve also got the lower value card symbols (10-Ace) to make up the rest of the reels.

Wild symbol – the scarab beetle with ‘wild’ written across it, this symbol substitutes for all other symbols on the reels. Whenever you land a wild it will trigger a wandering wild, which will wander across the reels offering respins until the wandering wild disappears. If two land on the same symbol at the same time you can expect a multiplier or 2 or 3 to be added to your win.

This is a great looking (and sounding) game, which does have a great bonus round with the wandering wilds. However, it’s not particularly high-energy or lucrative, and it could probably do with a scatter symbol to trigger another bonus round. That being said, this is a high-quality game in terms of graphics, and it’s not a bad game to play – there’s fair opportunity to win and you could do quite well in the respins.