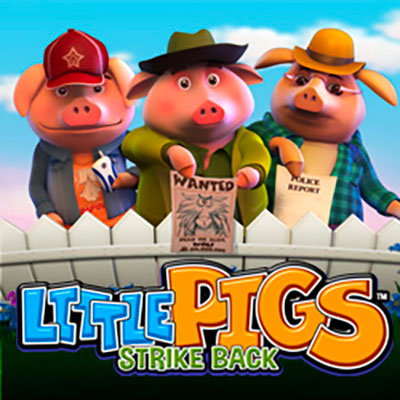 We all know the childhood classic of the three little pigs and that horror of the big bad wolf! Well the childhood classic has been cleverly adapted into this 5-reel slot game which produces 100 ways for you to win. There are plenty of features to keep you engaged and the three little piglets can bring you a free spin round. There are the all favourite scatters and wild symbol that you would expect to find in an online casino game too! This slot game might be based on a childhood fairy tale but the winnings can be fruitful with a winning jackpot of up to 5 thousand dollars.

Three Little Pigs is brought to you by Cayetano gaming which is an e-gaming specialist based in Bulgaria. The small business is actually owned by the international based Paddy Power PLC so they have plenty of financial backing. The small team of developers works hard to create traditional 5 reel slot games with exciting themes! This approach is taken to the next level with the creation of innovative bonus rounds – increasing players engagement in their chosen slot game. The company have been on the go since 2009 and create specialist gaming for online platforms, working for Sky Vegas among others.

Some other creative online slot games that create an entertaining spin include:

The background is the three different houses that the pigs build during their story. There is a cartoon element to the game which works well with the entertaining, children’s classic. The infamous wolf plays a role in this slot as well as the three little pigs themselves. The wolf releases the bonus rounds, acting as the scatter symbol.

The pigs act as a three-symbol stacked wild, creating the opportunity for some triple winnings, something most online slot games don’t offer.  You will also see the deathly cauldron, some corn, pumpkins and apples. The stake button is really useful because allows you to conveniently set the bet from anywhere between 1 dollar and 500 dollars – split across the lines. Set your bet and bear in mind that the maximum jackpot is 1,000x the base line bet! This creates the opportunity for a good winning.

The theme is enjoyable, made extremely light hearted with the light-hearted music which creates an atmosphere to absorb yourself into! The innocent creation of animations create a relaxed environment to play in!  The game is quite straight forward to play because of its simplistic layout and there are some good winning features. So, get ready to sit on the edge of your seat and huff and puff and blow the reels into place! It might not be an adventure packed game but that doesn’t mean it’s not entertaining! Wishing you look in finding those three little pigs who will help you on your journey of making some great winnings with their wild features and watch out for that wretched wolf!