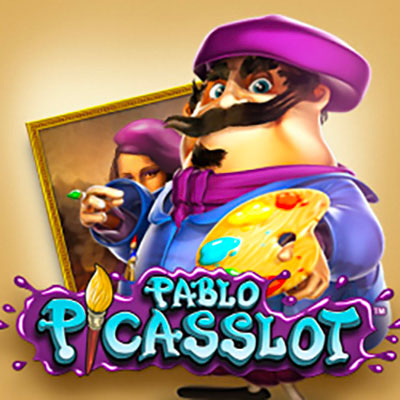 Leander Games have produced Pablo Picasslot, a charming slot game with a unique painting theme. If you fancy yourself as a painter, now’s your chance to get inspired as you spin the reels to land creative combinations and hopefully win some prizes. Perhaps you’ll land a painted WILD to reveal a classic work of art along with some cash, or maybe you’ll trigger one of the game’s extra bonus features for a real chance at high society living.

In this game, a professional painter welcomes you to his classy home studio where he is working on his next masterpiece. You can help him by spinning the reels to create brushstrokes and reveal all the necessary painting supplies. The visuals are bright and fun and the animated painter character is particularly engaging with his comical moustache and authentic appearance. The graphics appear quite simplistic at first, but as you spin the reels you’ll discover extra features when moving picture frames come into play. These additional features make the game even more exciting as you try to win big.

Founded in Argentina in 2008, Leander Games have been creating great casino games for a decade. The company’s games have gained them quite the following in this time, with fans having come to expect high quality, original slots that will always entertain and engage. Leander Games’ slots often include innovative features such as one-of-a-kind bonus games, offering players a unique experience that can’t be found elsewhere. These exclusive features along with consistently appealing graphics are what has made Leander Games such a popular slot game provider.

Pablo Picasslot is a 5 reel and 20 payline slot featuring a variety of brightly coloured symbols to liven up the reels. Playing card values 10, J, Q, K and A have had a paint splattered makeover and can win players up to 100 times their stake. High value symbols are an easel, a purple paint tube, a palette and a paintbrush, which can win considerably more – 200x, 250x, 500x and 1000x your stake respectively. The format of this slot is nothing out of the ordinary, but upon spinning the reels you’ll notice that there’s something unique going on here as some of the bonus features become apparent.

Pablo Picasslot is a fun, kooky game with a universal theme that all kinds of players can enjoy. The unique features introduced by Leander Games will intrigue seasoned players who are used to the usual bonuses and the game will also attract newbies through its comical elements and bright appearance. If you’re intrigued and think you have what it takes to create a masterpiece, why not try it for yourself?