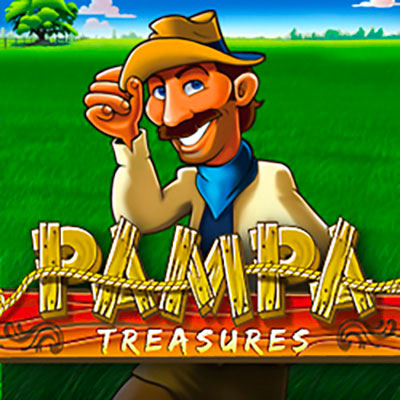 The Pampas are a vast area of lowlands in South America. The area is a natural region, sparsely populated and largely used for agriculture. In Pampa Treasures by Leander Games, a ranch from the Pampas is brought to life with cartoon characters and bright reels. A rancher, his wife and their dog and horse feature heavily, both in the base game and in additional rounds. For a fun agricultural themed game with plenty of colour and some great bonus features, this is the slot for you.

The visuals in Pampa Treasures are quite simplistic, the background showing a well-designed but rather sparse green field. Though players might expect more to grab their attention, these vast plains stretching behind the reels are an accurate depiction of the Pampas, which is largely made up of flat grasslands. The focus in this game is placed on the reels, which are more vibrant and engaging than the background. As you spin the reels, you’ll notice a range of bonus features that liven up gameplay and you’ll soon be feeling excited as you try to score a big win.

Leander Games are a leading name in slot game development and have been releasing fun new slots full of energy and excitement for ten years. The team at Leander know that great gameplay is what’s really important and ensure players enjoy a smooth experience when spinning the reels on their slots. They also incorporate a range of great bonus features in their games, surprising patrons time and again with their unique innovations.

Pampa Treasures is a 5 reel, 30 payline slot game and players have the option to choose how many paylines they’d like to play. Symbols include playing card values 9, 10, J, Q, K and A, which can win you between 5 and 100 times your line bet. Higher paying symbols include a knife, the rancher’s wife and the rancher himself, which pay up to 150x, up to 300x and up to 400x. Your best chance for a big payout of course lies in the game’s bonus features, of which there are a few.

Pampa Treasures is another great game by Leander with a host of original features to enjoy. The theme and layout is quite simplistic, making it easy to play, and there are some wonderful bonus features to get your teeth into. For a taste of life on the South American Pampas and to try and score some big wins, deposit and play today.