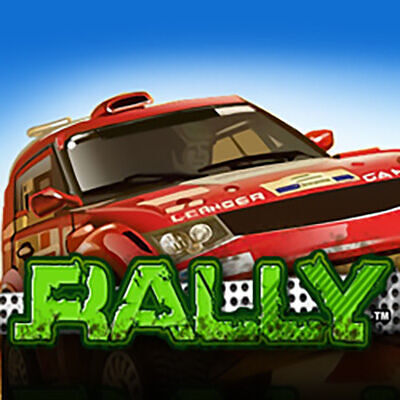 Speed freaks and petrol heads rejoice! This slot was made for you. Enter the dangerous and exhilarating world of rally driving in ‘The Rally’ slot, developed by Leander Games. Get on board with your co-driver as you navigate tight turns and exhilarating jumps at high speed in pursuit of the speediest lap time.

While the player will be static when playing this particular slot, the metallic reels, rally driver and off road truck symbols add to the emersion of this fast and furious sport. The graphics are not as exciting as the overall theme but do add a sharp and distinct flavour to the slot. Similarly the initial sound design accompanying each spin does leave a lot to be desired but does improve for the standout feature round. In this feature round the player gets the chance to take part in a rally in a unique bonus game.

A fairly young developer, Argentinian casino slots company Leander Games has produced high quality games that can run on browser technology and downloadable options since 2008. They are known for their interesting in-reel features and games based on other well-known gambling games such as Reely Poker and Reely Roulette with a poker side-bet and interesting bonus rounds.

Rally features a standard 5 reel, 25 win line setup, however is it possible to modify the number of win lines so you can choose between 1 and 25.

The wild symbol can be identified by the slot’s title emblazoned over it and will substitute for any other symbol in the game to award extra wins other than the scatter symbols. If you land 5 wilds in a row you’ll race away with 5,000x the coin amount. The rally driver symbol pays out 500x for 5 consecutive matches while the truck and tool symbols net the player 250x. The other symbols that fill out the reel include the playing cards from 9 to Ace.

There are two scatter symbols; the first is a trophy and landing it 3,4 or 5 times will award the player with a cash prize of 5, 50 or 150x their coin amount. The other is the bonus symbol which upon landing it on reels 1, 3 and 5 will take the player to the standout feature of the entire slot: the rally bonus round.

In this feature, the player is presented with a terrain map where they must decide which route to take from one checkpoint to another as they click on multiple flags along the way. Each flag the player reaches will give a cash prize. Players must be careful, however, as they encounter events that damage the car along the way. The car can spin or hit a cow, which causes 25% of damage while strong winds will take 10% of damage. There is a chance to repair the car at the end of each stage with a repair kit that restores 5%.  Reach 100% damage, and the bonus feature will end. The slot keeps the progress the player makes so upon returning they can set off from where they were.

This slot has an incredible bonus feature that puts the player at the heart of the action. The risk and reward nature of the feature creates an exciting addition to the slot and is arguably its biggest selling point. Once this has been completed however there isn’t much variety to the rest of the slot activities, which may result in a quick drop off for players.