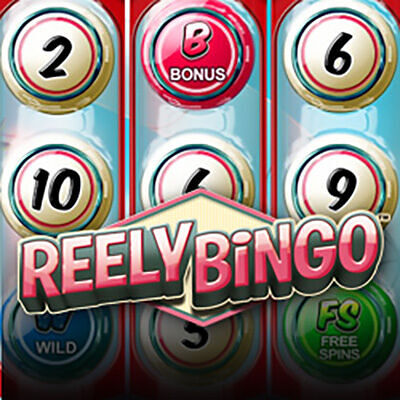 Love Bingo but hate having to make the trip to your local hall? Love slots but not a fan of the offering near you? Leander has you covered with their hybrid game of an online slot machine and Bingo game players can enjoy from the comfort of their own home!

The base game is very similar to a traditional slot: you win prizes for landing consecutive, identical symbols in a win line. In this instance the symbols are coloured bingo balls. The bingo side of the combination comes into its own during the bonus features.

The laid back jazz music and clean sterile look is reminiscent of a 1970s take on the future. The reels also behave differently to traditional slots in a number of ways. Firstly, the balls fall into their particular slots giving the game that measured, distinctive feel.

A fairly young developer, Argentinian casino slots company Leander Games has produced high quality games that can run on browser technology and downloadable options since 2008. They are known for their interesting in-reel features and games based on other well-known gambling games such as Reely Poker and Reely Roulette with a poker side-bet and interesting bonus rounds.

Overall this 5 reel, 25 win line slot has three key features: it has a side game of bingo that plays alongside standard spins called ‘Slot Bingo’. This side bet will double the cost of each spin and cause a card containing five numbers to appear. After the player completes each spin, the number in the centre of reel 5 will be crossed off the bingo card if the number appears. This process will last for five spins and the amount the player will win depends on the numbers crossed off and the pattern they form.

There is also a blue wild symbol, which will replace any symbol other than those from the bonus round and scatter symbols. This blue symbol also pays out the most at a huge 5,000x the players wallet when 5 are landed in a row.

As with most slots, the free spins round is activated by landing the corresponding symbol on reels 2, 3 and 4. When the player enters this round, they will be rewarded with up to 20 free spins randomly.

The Video Bingo Madness feature is not only a mouthful to say but also one of the standout features for this slot. In this feature, the player is presented with a screen showing four separate bingo cards with fifteen numbers. A series of balls are then drawn and appear at the bottom of the screen, each one crosses off a number from the bingo card when matching. The player will win by combination of how many numbers were cleared on the card and their positions similar to the side bet round.

The mixture of bingo-based features melded with traditional slot rules creates an unusual proposition to the average player. However the combination is equal enough for every player to pick and choose the areas to focus on and it becomes a highly addictive slot with big wins possible for the bingo pros out there.