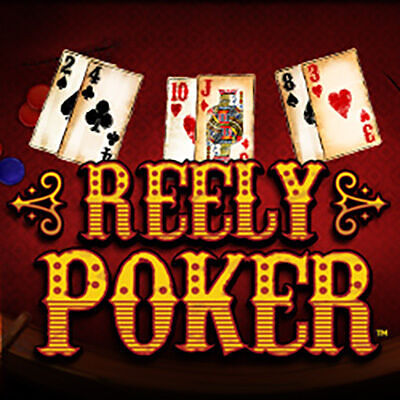 Everybody welcomes a traditional casino themed game and this is one is extra special because it merges an old-time classic into a cleverly adopted online slot game! It adopts the rustic creation of a game of poker yet, illuminates It into a fun and engaging game with both the concept of a slot game and some poker features. Reely Poker is developed by Leander gaming who have created a full range of online slot games based around the core casino favourites. The theme is so traditional that a western, saloon, style energy is injected into the background and the online slot games elements. For example, the cards have a sense that they have been around a few years with their forever fading symbols and injured corners.

Leander gaming have been on the scene since 2008 and boast a variety of cleverly adapted themes. They are based in Argentina and their profile of online slot games is developed with the technology which allows their players to spin online, without having to download any software.

audience. At the moment, these titles are not available to USA players.

These slots are great for increasing your winnings because of all the bonus features which are mainly prevalent through bonus rounds and wild/scatter symbols. These are great to keep things fun and the winnings up! There is a side bet of poker going on as well as the spinning and rather innovative features such as ‘nuclear zombie’ which is an impressive wild symbol, overtaking other symbols and increasing your winnings!

Reely Poker adopts a traditional five-reel game with a maximum of thirty pay lines – the players can choose how many lines they want to play. It should be noted that if players want to engage in the side game that all thirty lines need to be played. This element will impress those who like lots of pay lines because it adds an additional ten lines! Players choose a row of symbols and are dealt three, five card poker hands. If the players hand is the best of the three dealt, there are winning offs of 2 to 1!

Joker Wild – Substitutes all other cards except for bonus or scatters. The Joker can increase winnings 10,000 x the original coin value (when landing five in a row).

This online slot is ideal for gaming enthusiasts because of the engaging side games and bonus features. These include the auto play button (running up to 500 spins), mute and speed button. The real selling point for this game is poker element which can increase winnings through. For example, having a pair will win the player a prize. Get ready to win some great money with this two in one game from Leander gaming. For example, a Royal Flush pays out a respectable 500 x original bet and a straight flush 400 x. Enjoy playing and look out for other themes which adopt traditional casino themes to their online slot games!