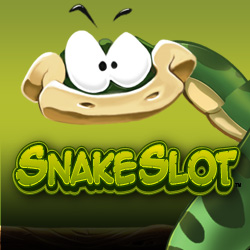 We bring to you another snake themed game, this time in the form of Leander’s Snake, a simply named slot that has one hell of a design. Even though we’re aware that aesthetics aren’t everything in order to make a successful game, we also know that the better looking titles tend to interest us more. It may be shallow, but it’s so so true.

Think of this as your way of tracking deep into the jungle, where vines, leafy trees and creepy crawls grow all around you, while the beating sun is hidden by the shade of the canopy. It’s colourful, adventurous, and above all else, it’s a great way of grabbing the coins of this slot for a ticket price of 30p. Who knew travel could be so cheap!

So who is behind this fantastically vivid game? That would be Leander, an independent company that’s renowned for its flexible thinking. In spite of them being less well known than Playtech or Microgaming, this label has surpassed such names in many ways. The reason for this is because they attempt to push the envelope on what’s fresh and what’s old fashioned, all the while guided by the knowledge of their CEO, Steven Matsell.

Having partnered up with various clients since their formation, Leander has been able to open offices in the UK and South America, with the latter their HQ for development. Is it any wonder then that they’ve been nominated for awards and readily recognised by fans and peers alike?

The moment you’ve all been waiting for is finally here: the jungle awaits. Despite the imagery you see on wildlife documentaries, the colour palette of this location is vibrant, with the animals overly friendly. Some reviews have liken the aesthetics to that of the Jungle Book cartoon, and with that we’d have to agree; just look at the snake and you’ll see exactly what we means.

In among the bananas and watermelons lives a couple of fancy extras that are sure to make you king of this jungle. That would be quite the feat considering there’s 30 winlines you need to tame, and so we can’t think of a better time to start preparing for your life as royalty than right now.

When all is said and done, this is a slot machine that nobody can say doesn’t give you what you want - there’s action, large cash prizes, and an ample supply of bonuses. The feature we love most is the Jungle Party, as it gives us something beyond the genericness of free spins and wild symbols.