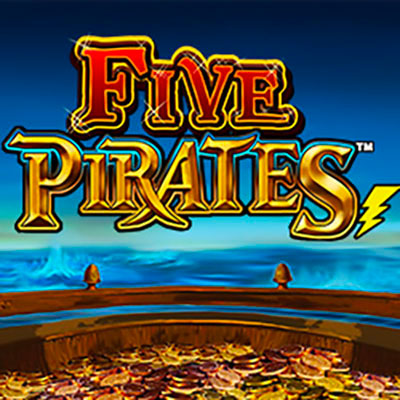 Get ready to plunder and pillage as you embrace the pirate’s life and take on the seven seas to hoard the riches and treasures that await. Let Lightening Box Games take you on the swashbuckling adventure of a life time with pirate hatsand parrots at the ready, this game is complete with skulls, swords and pirates galore, not to mention the audio that immerses you fully into the game and aboard your ship. If it ‘Yoho and a bottle of rum, the pirate’s life for you, get ready to love Five Pirates.

Since 2004, Lightening Box Games have been providing casino slot games to the gaming industry, priding themselves on their mathematical prowess and subsequent ability to provide engaging games with varieties of exciting bonuses and features that players absolutely love. They are constantly innovating new, fresh exciting titles to keep the industry fresh and continuing to inspire players.

Society has, for many years, been obsessed with pirates and this obsession in our culture has created a rather romanticised image of piracy. The modern-day pirate has almost become a heroic figure despite the murderous history of the real-life pirates of the seas. From the stories like Peter Pan, Sinbad the Sailor, Treasure Island and most recently, Pirates of the Caribbean, the allure of Pirates has been firmly cemented into our story telling in both written word, movies and games. There is something about the rouge vagabond, sailing the seas in complete freedom, drinking rum and steeling loot that is seemingly addictive to us and this game taps into that fascination. There is something in all of us that would love to be Captain Jack Sparrow for a day or two!

Well, now you can enter this world, without the danger of navigating oceans and avoiding capture! So, grab your sword and let’s get playing:

This pirate themed game is will whisk you away to the high seas and pull you in to the fun and adventure. The bonus games give you the chance to win big and you are guaranteed to enjoy your epic adventure.