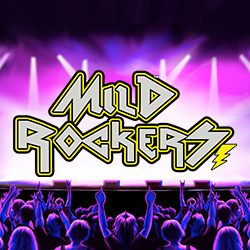 See yourself as a rock ‘n’ roll star that just hasn’t had the opportunity to strut their stuff? Well get out of the audience and onto the stage in this rock ‘n’ roll themed slot game: attitude problem optional.

This is your shot to get up there and give the audience a show that they’ll never forget – so pull on those leather trousers, choose your instrument, and channel your inner Gene Simmons.

Lightning Box aren’t just a cool name, they’ve got the brains too. This games company was founded in 2004 by passionate games developers and mathematicians, which means that the systems behind the games are smart, and therefore deliver not only creative and high-quality gaming experiences, but also lucrative ones. If you appreciate Mild Rockers then why not give their other games a go, like Blazing Goddess, Pixie Gold and Chilli Gold. There’s math behind the madness.

Mild Rockers is all about the rock ‘n’ roll lifestyle – because who wouldn’t fancy their moment as a rock star?! It’s a five-reel slot with up to five rows (it varies across the reels) and an epic 80 paylines. The slot game is already unique in the way it looks, with the centre reel being 5 rows, and moving outwards until reels 1 and 3 have the smallest number of rows. Mix rock ‘n’ roll symbols like a kiss, a guitarist, a singer, a crowd, and a drum set with some cool music, and you’ve got yourself a game that looks and feels good.  You even get a real rocker music celebration when you win – making you feel like you’re right there on the stage, with adoring fans screaming at you.

Wild symbol – the wild is in the form of the game’s logo and can substitute for any other symbol on the reels, except the scatter. These can also become stacked wilds.

Scatter symbol – the scatter is in the forms of a pair of pouty lips: land three of these and get 8 free spins. Land another scatter in these free spins and you’ll get an extra free spin. You can also land wilds and stacked wilds in this round, which can give you some great wins!

This slot game is exciting from start to finish – from the soundtrack that it’s played to, to the high-quality graphics, the unusual reel set up through to the lucrative free spins round. Perfect for the rock ‘n’ roll beginner or the gamer that’s bored of the usual standard slot games. Lightning Box have delivered yet another game that enhances the gaming experience, and they won’t be stopping there!