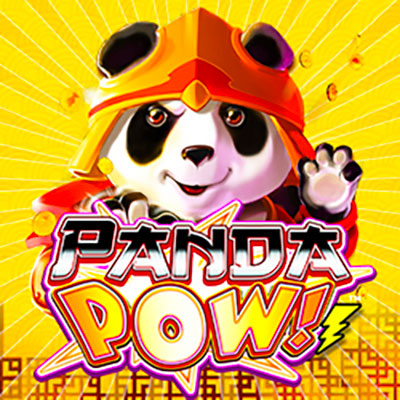 Panda Pow by Lightning Box has our favourite adorable animals showing off their kung-fu skills and it’s hard to imagine anything better. While pandas aren’t the likeliest of martial arts experts, the success of this combo in Hollywood has inspired a brilliant slot game that’ll soon be your favourite, with a traditional Chinese aesthetic and a host of great features. Spin the reels and fight along with the toughest pandas around as you attempt to win big cash prizes and trigger bonuses.

Part of the appeal of Panda Pow is its impressive overall look, with ancient Chinese visuals faultlessly designed throughout. The reels are intricately adorned with blue and gold detailing, with a contrasting background coloured entirely in red. The reels are framed by a panda’s favourite treat of bamboo and alongside the bears are plenty of traditional Chinese ornaments and symbols of luck, to set you on track for a win.

Lightning Box are based in Sydney and have been supplying slot games to the gaming industry for nearly 15 years. They have now firmly established themselves as a leading name in slot development and continue to innovate as they explore mobile and social casino gaming. Lightning Box’s founders have a background in mathematics, boasting over two decades of math focused slot game design experience. Their recipe for a successful game is a mix of maths, amazing visuals, cinematic audio and a touch of magic – which certainly includes everything slot enthusiasts are looking for! Lightning Box’s engaging titles include Lost Temple and Dolphin Gold, but they have also created many more brilliant games for you to try out.

Panda Pow has 5 reels and 25 paylines. The game comes with easy to use tools for changing your stake, along with plenty of options for flexible betting as you can bet from 0.01 credits per spin to 40. The paytable is made up of playing card values 10, J, Q and K, as well as a fan, lantern, traditional coins, fish and panda. The maximum cash prize awarded in the base game is 500 times your stake, which is awarded if you land 5 pandas in a row across the reels. For bigger wins, you’ll be hoping to land some of the game’s bonus symbols and additional features.

Panda Pow by Lightning Box is a wonderful game, engaging and thrilling players as great visuals and gameplay combine. This slot is easy to play so everyone from beginners to experts can enjoy it as they spin the reels and hope to win big. These headband wearing pandas try their best to look menacing but are still incredibly cute, making this game even more irresistible to players. Join forces with the pandas today, trying your hand at kung-fu to win a host of bonuses and cash prizes.