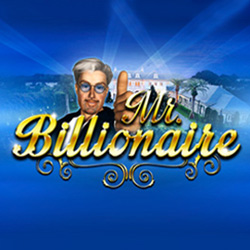 What would spend your billions on? Cars, diamonds, an island in the Caribbean? Join Mr Billionaire as you play this Leander Games online casino slot game. Check out his flash cars, golden briefcase and expensive watches as you play to a backdrop of a lavish mansion fit for, a billionaire! A guard dog guards his cash, but not to worry, you can cash in on some of your own in this slot game. Enter into a world of riches and extravagance as you play, Mr Billionaire.

Leander Gaming boasts an impressive portfolio of engaging and high-quality online gaming and with its CEO’s having over 10 years of experience in the industry, it is not difficult to see why. Their graphics and overall production is impressive and the crisp animation is what drives gamers back to Leander titles again and again. This Argentinian based software developer has proven to be a pioneer in the gaming industry and have earned their positon beside some if the industries top players. They have something for everyone with a variety of themes and entertainment.

Every year, the American business magazine, Forbes, release their compilation and ranking of the documented net worth of the worlds billionaires. This list was first published in 1987 and Bill Gates has been at the top of the list for the last 18 years! This kind of wealth not only buys private jets, super yachts and all the designer clothing you could ever imagine, but some of the world’s richest billionaires actually own their own Islands. Roman Abrahamovich, Richard Branson and Bill Gates are a few of the Billionaires with the luxury of owning their own private islands.

To get your hands on a slice of these riches, all you have to do is settle in to your seat and play Mr Billionaire:

This game has a 90’s retro feel to it and is engaging with some great features for the player to enjoy.