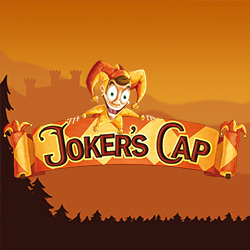 Get ready to enter into the world of trickery and jest, as the royal jester performs for the King and Queen. The banquet hall awaits, were you can take your seat and watch the show. The reels display the joker himself and features the King and the Queen, the royal princess, the hunting bird of prey, the knight’s horses and the jokers hat to immerse you in to the medieval world. Settle in to your seat and let this Merkur Gaming production transport you to the castle and into the world of Joker’s Cap.

Merkur Gaming is part of the Gauselmann Group, who have an impressive 60 years of experience within the gaming industry. The company, based in Germany, utilised Merkur Gaming to spread their productions to a worldwide market and they have done exactly that. Their portfolio of over 150 titles is not to be sniffed at and they have certainly made their mark on the online gaming industry. Their games tend to be simplistic in nature and hark back to the traditional gaming off live casinos. Players seem to love this return to simplicity and keep coming back for more and more.

In medieval times, the jester was an entertainer who was often a member of the household staff of a nobleman or the royal family, employed to entertain guests with a wide variety of skills. They would entertain with song, dance, magic tricks and jokes as well as acrobatics and juggling. The jester was not limited to noble households. They would also be found entertaining commoners at fairs and markets. Early jesters were popular in Ancient Egypt, and entertained Egyptian pharaohs and even date back to the Aztecs.

Join in the merriment and enjoy the jesters show as you play this Merkur online slot, Jolly’s Cap.

The Card Gamble:  starts a card game in which you need to predict whether the next card drawn is red or black to double your money.

The Ladder Gamble starts a skill-based ladder climbing game in which you need to press the Gamble button to ascent the prizes on the rungs.

With both gamble games, a wrong move will lose all your winnings and the maximum win amount is 140 coins.

Joker’s Cap is yet another of Merkur Gaming’s simplistic yet highly enjoyable online slot games. Immerse yourself in Jolly’s world and you are sure to enjoy this game.