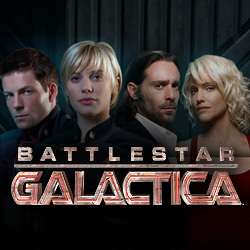 Battlestar Galactica online slots casino game is based on the TV series of the same name. If you’re a fan of the series you’ll love this game. With a militaristic soundtrack and futuristic backdrop the reels transport you to faraway galaxies with the main characters from this iconic TV series.

One of the original slots developers, Microgaming is based on the Isle of Man. Since 1994, they have grown in stature and have over 800 different slots which are played across the world and of a very high graphical standard. In 2010, they launched an integration platform called Quickfire Games which enables other game developers to offer their games through Flash and Mobile platforms.

The game also has three different play modes (Normal, Run and Fight) which are randomly triggered and different bonus games apply in the different modes.

Click to read the game rules and View Pays to view the paytable.

You can play auto by clicking Autoplay and choosing a number of spins. You can stop it at any time by clicking Stop.

Or if you prefer you can play manually one spin at a time.

Randomly activated during normal mode, up to five reels are transformed into a wild reel.

Triggered by one FLT symbol on reel 3, 10s, Js, Qs, Ks and Aces are replaced by a random symbol.

Each spin increases your rank in this game and unlocks video content.