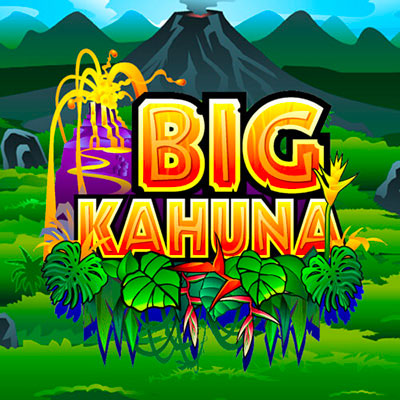 This online slot game will take you straight to the exotic land of Hawaii. Big Kahuna is somewhat of a mystery to many but the most favoured explanation would be a Hawaiian shaman. Big Kahuna is follows a traditional 5 reel format. The tribal atmosphere is projected over 9 pay lines – the pay lines are not fixed which means that wind can be formed both horizontally and diagonally! The game includes a range of creative symbols which help fortify the Hawaiian theme, including: scary tribal masks, shamans, a golden volcano and a native iguana. Some of the lower paying symbols that are adopted include differed items of fruit (like to good old days) but these have been adapted with a modern twist – keep an eye out for coconuts, kiwi fruits and such like! You will certainly feel the heat with this positive and energetic theme!

Microgaming have developed a large portfolio of online casino games in their time. They have been around since 1994 but have gained recognition since 2002 when they created Viper which created great expansion for the company. They have a wide range of online slot machines with eclectic themes, designed to engage and improve customer engagement.

Players have a lot of freedom and can make a maximum bet of 45 coins per spin, or a minimum of 0.5! Look out for Big Kahnuna wild symbol because it can pay out up to 8,000 the original bet when five are found on any active line! In this online slot game, the Big Kahuana is only able to stand in for the fruit symbols. The scatter (which can be recognised as the wide smiling monkey) will pay out wherever it lands. Two or more monkey symbols will pay three credits for two symbols, 10 for three, 25 for four and 200 for five. Many of the symbols will pay out for less than five symbols. For example: the volcano, which will pay up to 2,500 for five, then 1,00 for four or 625 for three. The bonus rounds are triggered by the volcano and the tribal mask (not the scatter symbol). Three or more volcanoes will let you pick a piece of fruit – the fruit symbol is offered to the volcano and the value will be determined from here. Three or more of the mask symbol sparks a small side game. You will have to choose from one of the ten mask symbols. There is a lot to play for with this bonus and picking wrong can leave you with nothing!

This is a very interactive game which gives players the ability to have an element of control. This is seen from setting your wager to the interaction of the bonus rounds which will massively determine your success! There is almost a mystic, ritualistic element going on in this online slot game which creates an eerie, yet, entertaining atmosphere to spin in. Do not worry too much though because the music is somewhat liberating with the sounds of jungle wildlife.