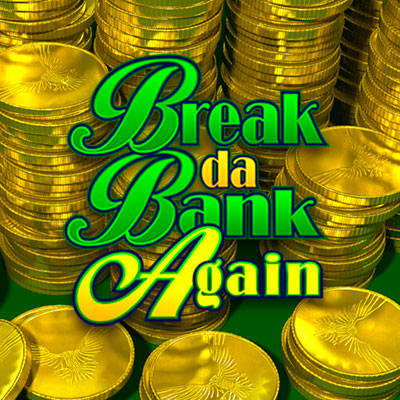 If there was 1 game that was loved and adored by many players that want to play it repeatedly to enjoy the old school graphics, simple gameplay, and the amount of winnings they could make, why not make a sequel to it?

Do you remember one of Microgaming's most popular games on the market, Break Da Bank? Well, because of the great minds that work behind the brand, you will be able to break the bank again!

But as you've already broken the bank be for, how could your wreck it again with some of their new upgrades that make it harder for you to manipulate? With all of the extra BONUS FEATURES that this sequel has, of course!

There are quite a few casino game developers that have been in the industry since the market started to increase a couple of decades ago. And often or not, there are many casino gaming connoisseurs that always return to playing some of the oldest and simplest slot games that you could think of. Why? Because they bring nostalgia to life, and people love reliving that nostalgia every once in a while.

Microgaming, a group of video casino game developers that were established in 1994, is able to make every player feel that nostalgia in every game that they make. Just have a look at some of their other games like Cops & Robbers and Jack in the Box; you wouldn't be able to say that you haven't felt a bit old school after playing on of those slots!

If you've played the first game, then you'll be familiar with some of the base symbols that will appear on the reels. You'll get the chance to see your favourite 5 reels with dollar signs, gold coins, vaults, bars, and Break Da Bank logos stuck onto them again. Some of the new symbols that you'll come across include the generic poker card values that go from 10 to ace.

It's no doubt that Break Da Bank Again is a lot more advance that its prequel, Break Da Bank. It breaks away the simplicity of only having 1 special symbol that can help you win more than what you've put down as a stake.

And even though Microgaming is known to make some of the simplest slots in the market, it's great to upgrade from 1 of their games which is aimed at players that want in a few more features to spice it up. Why don't you give it a shot today? You might finish the day with a bit more money in your pocket today!