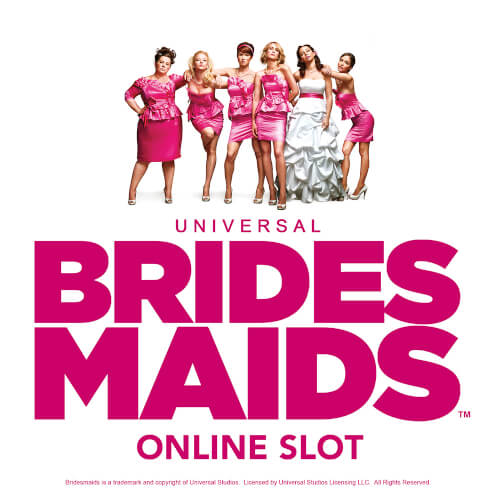 How could anyone have not watched one of this decade's most loved films, Bridesmaids? How could anyone not laugh and revel in the entertainment of watching a bunch of women struggling to prepare for 1 lady's wedding, especially after eating some dodgy food from a sketchy restaurant before going for a dress fitting? Microgaming brings you the online slot game that has the same name as the movie, and integrates all of your favourite moments and characters into one single iGaming product that can entertain you for hours on end.

If there is one thing that you can be sure of whenever you're searching for good online slot games to play, is that Microgaming provides you with iGaming products that not only have large payouts, but lots of entertainment for you to revel in. Just because they're around the same age as Google, it doesn't mean that they produce game with obsolete technology.

They understand each and every iGamer always likes a bit of familiarity, which is why they tend to stick to classical formats whenever they develop and release a game in the casino market. And if you play some of their other games before, like Cops & Robbers and Avalon, you know that they hand out their jackpots the moment whenever you make a big win.

You get to see all of your favourite bridesmaids once you load up this slot on your favourite device. Some clips from the movie that will play in the game will make you remember how funny Bridesmaids was when you first watched it at the cinema!

Like with most traditional slot games, you'll come across clubs, diamonds, spades, and hearts that all act as the base symbols with low payouts. The base symbols with high payouts come in the form of a few familiar faces. Becca, Rita, Megan, Helen, Annie, and Lillian. But keep an eye out for the special symbols that will also appear on the reels...

The Bridesmaids slot is another game Microgaming has developed that leans away from most of the traditional slots that they have produced. They wanted to keep the same amount of fun that the movie has in the game, and they have done that with a lot of success. If you want to reminisce over your favourite characters and moments from the film, I recommend that you load up the Bridesmaids slots on your screen right now!