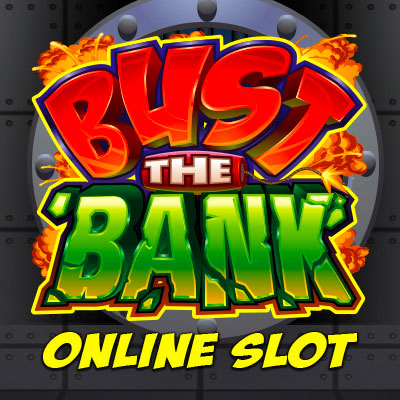 It's always tempting to find the closest bank to you, and see if you could conjure up a plan with a few trustworthy friends to rob it with as much money as you could carry.

Made by the developers behind Microgaming, Bust The Bank is a bank themed slot with a few little twists that will keep you entertained until you finish playing it on your favourite device. This isn't your ordinary slot game with a few special features that can boost your winnings, this is a masterpiece that's filled with a large number of bonuses that will send your winnings sky high!

Whenever you hear about a gaming developer that has been around for a long time, you know that they obtain enough wisdom to know what every gamer desires when they load up a slot game on their device.

Microgaming began their mission to contribute fantastic slots to the casino industry since 1994, so they know exactly how to make each of their games both easy and exciting enough for every player to enjoy. If you're not familiar with Microgaming, then playing some of their other games like Cops and Robbers, Dragon Lady, and Victorian Villain will definitely make you remember them for being one of the leading developers in the casino world.

Before you start playing Bust The Bank, you should throw aside any assumptions of it being another ordinary slot game where you'll win a substantial amount of winnings in a linear fashion. You begin inside a bank vault that contrasts against the golden winnings that you'll get with the matching combinations you need to get on your 5 reels.

You have your base symbols with high payouts that come in the form of a policeman, a  police bulldog chasing down a bad guy, and two bank robbers carrying stolen goods. If you win, some of the symbols become animated and jump around your screen, which is one of the main elements in the game that makes it stand out from all of the other bank themed slots you may have played in the past.

Some of the other base symbols with low payouts come in the form of cartoon symbols instead of the usual card symbols you'd see on slot games, such as an explosive clock, a policewoman driving, and a security van. But you're going to need more than matching those base symbols together if you want to escape the vault with a big bag of fortune over your shoulder.

Microgaming has definitely kept a few players at the edge of their seats with this online slot game. The amount of BONUS FEATURES that they've implemented in the slot has lead them astray from thinking that this will be a traditional casino game where you just have to get as many matching combos as you could to make big winnings. Boy, were they wrong! Bust The Bank will certainly bring your temptations of robbing a bank to life without actually breaking the law, and will leave you with big winnings in your wallet at the end of the day!