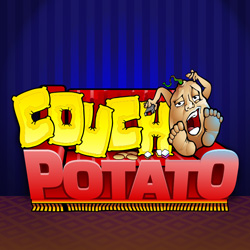 If you are sat on the couch reading this and wondering what a Couch Potato is then maybe you’re stuck in a self-fulfilling prophecy. In our minds the couch potato is someone that is prone to be quite lazy who generally enjoys more time on the couch than outside with mother nature. The term couch potato is a derogatory term yes, but it also happens to be the name of this online slot from developer juggernauts Microgaming.

Couch Potato stereotypes aside, what we have here is an online slot that will take players on a journey into somewhat of a deep-dive into the cracks in the sofa to discover some rather handsome cash prizes. The design element here is as you’d expect, with a couch being very clearly laid out for players to gawk at, as well as a rather lazy lucky man sitting with his feet up; it’s the attention to detail like this that has made Microgaming a very big name in the online gaming industry.

Opening it’s doors in 1994, Microgaming is one of the most progressive game companies in the entire world. After the release of their Viper software in 2002, the company saw itself sail to new heights to both players and their peers alike. Over the past 10 years Microgaming has paid out more than 100 million in jackpots since it’s inception. Now that’s impressive.

Couch Potato is a 3 reel slot by 1 pay-line which, as you can probably guess, is very simple to correlate into winning combinations on the reels. Can we also mention the very well designed user interface that maps out a clear course of action for players to pick and choose. The control system for this slot can be found at the bottom of the screen and has everything you’d need in order to begin this slot with a chosen bet amount that you, the player is comfortable with.

The reels in Couch Potato spin so fast that the developers decided to include a blur effect on the reels when they are spun. This is just one of countless examples we could give of the detail that Microgaming have put into this slot. If players are interested in what symbol scores what, then they need look no further than the pay-table found on the right hand side of the reels in all of it’s laid back glory. Each symbol in this slot is in line with the couch potato theme of this slot, with additional symbols also at play, including wilds and scatters, which once again can increase scores tenfold when used correctly.

Don’t be anything like the name of this slot suggests, and instead choose to sit upright and play this slot with the un-ironic intentions we know some of you out there crave. And even if you are a couch potato, you will probably find some humour in the graphics and overall concept so there is that also. In Couch Potato you are given a fly on the wall’s perspective of life with a sloth, so why not get him up by running a few reels, shaking his couch and see what kind of loot falls out?